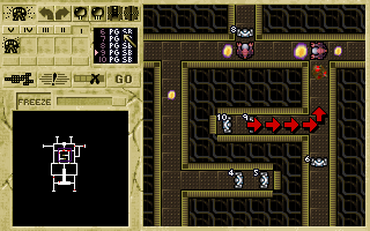 
+ Well done spooky and militant/fanatical atmosphere for its time, blends FPS with TBS, pretty good enemy AI, nice intro cutscene, pretty good in-game ambience for the time, innovative gameplay (control 1-2 squads of terminators (heavily armed space marines) in semi-real time making for some very intense moments), decent weapons arsenal (flamer, auto-cannon, storm bolter, etc.), level system? (Deathwing campaign - no mention of it in the manual), decent mission variation (cleanse (burn an area), rescue, retain artefact, survive for x amount of time, kill x amount of enemies, contain (keep from escaping or reaching a certain area), claim and hold an area), waypoints (see Starcraft), overwatch (similar to patrol; makes your troops react to enemies on their own), pretty good close combat animations (and pretty bad death animation except for the terminator you're currently controlling), issue the same orders to more than one terminator (by holding shift and selecting more than one in the top down view, limited use but can save some time), mini-map in the top down view (speeds up movement), decent amount of tactical depth, surviving terminators are carried over to a later mission at one point in the campaign

+/- Using the old school RPG menu crosshair seems to give the best shooting accuracy with storm bolters, CD version has a small pre-mission cutscene but replaces the intro song with a really cheesy/90s edgy vocal track, tile-based movement, limited ammo on some weapons, all squad members die in one hit, can't keep shooting when an enemy moves within one tile of the terminator you're controlling, while the AI alerts you when Genestealers are near a certain squad member it sometimes doesn't happen and the message gets cut off when using the Freeze command (the important part, the squad member number, comes last in the message), can't see anything while pausing the game (prevents using it to plan your actions without stress but also means you need to learn hotkeys for quitting a mission or the game itself; there's no in-game sound or graphics options), no manual save (the game auto-saves tutorial and DW campaign progress between missions), enemies can sometimes be hit behind corners, terminators can't occupy the same square at once (to for example move past each other), most of the story is kept in the manual, while there’s a lengthy tutorial it doesn't explain the icons and AI quirks (for example you need to read the manual to find out that the secondary flamer attack is suicidal),

- Unresponsive controls (need to press and hold F for like a fifth of a second for Freeze to respond, delays on other actions from moving makes it easy to accidentally shoot more than once using the flamer - frustrating when you need to save ammo for certain objectives), uneven difficulty due to the time limit on the freeze command (when the bar runs out it becomes impossible to control more than a couple of terminators at once), easy to accidentally issue move commands in the top down view when you want to select a different terminator, one command bug (terminators shoot down doors despite turning off overwatch), very primitive close combat where succeeding is a matter of luck rather than skill, NPC AI is pretty dumb (doesn't shoot effectively making their weapons jam, then don't act accordingly by retreating, flamers choose to die instead of wasting their ammo), eventually repetitive (no enemy variety, gear is often chosen for you and is often the same), very tedious to find artefacts which is needed in some missions (they should've showed up on the individual radar screens along with the enemies), lack of hotkeys for some actions and control options (Freeze needs to be closer to the movement buttons), most missions don't let you equip the squad(s) yourself, in-game terminator voices are really over the top (the intro voice is unintentionally funny as well), worse music in the DOS version (compared to the Amiga one), silly speech animation on the commander during mission briefings, sometimes confusing info in the mission briefings ('Rescue' mission), have to quit by closing DOS instead of pressing 'T' or the experience gained during the DW campaign is lost (game acts as if the mission was a failure), no difficulty options, need to right-click at a certain spot on a door to open it (in top down view your troops auto-open doors if routed to move past them),