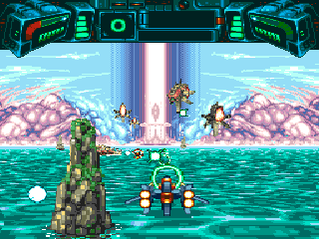 
​
​
+ Technically impressive (good use of the addon's scaling and rotation, good use of colour), good art direction and animation, some very large and detailed sprites, decent CGI cutscenes for the time (very low colour count though), mixes on-rails and free roaming stages with different objectives (pre-Star Fox 64), voiced step by step mission briefings with nice wire-frame models of your targets, control and sound options, fun and varied weapons (gun drones, smart bombs, homing missiles/plasma balls, air to ground bombs, lasers), switches between different vehicles (two space ships and a walker - walker has speeds boost one ground and in mid-air after jumping (hold the button), can also switch targets to lock on to (tap the jump button)), choose your path once (at one point on stage 2 you can choose in which order to tackle the next three missions), little to no slowdown, some interesting mechanics (being chased by bosses/projectiles, having to destroy targets in the right order, boosting and jumping as the walker (somewhat underutilized), conveyor belts (also a bit underutilized), target lock on), some good bosses (stage 2, stage 3, desert 1, the lock-on laser boss, the final boss),

+/- No life refill after completing a mission, power ups need to be shot once to 'activate' (transforms them into a circle that you need to fly through to get the effect), unlimited continues?, time limit until power ups disappear

- Controls could've been better (no speed adjustment, somewhat slow turning controls), depth perception is pretty hard (some objects seem to hit slightly before they reach your ship), annoying smoke trail on your ship when you're one hit from death (transparency/dithering would've helped here), can't access mission briefings or game options while in-game (the latter is annoying since you'll have to play until the second stage to realise that you want to have the Special button next to the Shot button), steep difficulty curve (stage 2 is much harder than stage 1 and the last step of the mission is somewhat vaguely described), very busy/pixelated backgrounds in some of the free-roaming stages, somewhat weak explosion sounds overall (more of a quiet rumble than an explosion sound), the charged shot weapon seems pretty useless, gets repetitive after a while (repeats the stage 2 spinning core boss once, lack of mission variety (rescuing, escorting, dogfights or fighting alongside allies), second desert stage boss takes too long to kill considering its pattern, autoscrolling stages are always a straight path (though you can scroll the screen a bit to the left and right) - no twists or Panorama Cotton style path splits, generally simpler autoscrolling stages than some older rail shooters (no sideways flight, no roll move, no boost or break, no fuel limit, no specific weak points on most bosses - see AfterBurner/Galaxy Force II/Star Fox), the last tunnel boss (unavoidable damage?), overly long and repetitive final Walker stages (the mechs here also have easily exploitable AI), somewhat easy final boss, lower volume during the ending speech and staff roll, some trial & error (need certain weapons to avoid damage at some points, some boss patterns)

Notes:
Weapon changing bug during Walker stage (only in the Kega Fusion emulator?), need to press the button 3+ times to switch