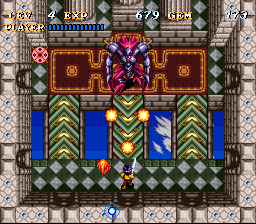 +
Strafe move (hold l/r)
Fast paced action
Interesting concept (take over spawn points (by emptying them on enemies) to restore the world and its inhabitants and solve minor puzzles to get to each dungeon boss)
Check points which serve as teleporters back into town (there are additional one-way teleporters here and there in dungeons as well)
Enter people's dreams (access hidden items in the waken world)
Some decent humour, one mini-game, thunder ring (release thunder by touching certain stones in dungeons), some nice effects (lighting, transparency, raster effect), life refill upon levelling up (full) or reviving creatures (partial), good bosses overall (some large sprites as well, they only have one pattern each though), sentient snowball enemies, some memorable locations (miniature world, volcanic island), some interesting story telling approaches (flashbacks and dreams reveal people's fates piece by piece), some hidden items, telekinesis (draw gold towards yourself using the strafe move)

+/-
No world map movement (pick your destination like in King Colossus or Quackshot instead)
Somewhat random damage output
Need to return to town regularly so as not to forget to talk to all creatures
Some respawning enemies
Can only equip one armlet at a time (buff item)
Some plants have no soul?, similar atmosphere to Actraiser (even re-uses some sfx), bosses are immune to your spells

-
Stiff control (no diagonals, can't move while performing a regular attack, can only open chests from the front, curved walls stop your avatar while edges make him go around them)
Repetitive dungeon combat (spawn points often hold many non-challenging enemies - breaking game flow)
Can't speed up or skip text
Some easily exploited enemy AI (gets stuck around corners)
Some backtracking (plenty of artificial gating, late game fetch quest)
So-so control over spells (an orb keeps circling around you so you need to wait for it to align with the enemy), somewhat sloppy hit detection, no visual clue for Emblem F (a town member mentions that you should remember the spot in the mushroom's dream, but it seems to refer to a spawn point close by which is made reachable in the dream), only one save slot per game, unkillable enemies in tight spaces (crabs in dungeon 2), many saved creatures are irrelevant to your quest (yet some seem important, such as the squirrel who follows you around or the snail racers), some spelling and grammar errors, auto-use surplus herbs picked up from chests (can only carry one at a time), safe spot on third boss (skull phantom), old dialogue usually doesn't update after events take place, same music in every town (great track though), clues are sometimes given after you've already solved the problem, some cheap hits (invisible enemies, super fast robotic mice, the ghosts and orbs in the castle), dialogue choices don't matter, cliché and somewhat fragmented story (you're not told the reason for leaving with the airship, forced and rushed love story near the end, some poorly developed scenes), no hints on how to get the clubhouse pass in the first town or emblem G in the lab (both require pushing a creature to find an item underneath and it doesn't happen immediately when moving against them - fortunately these items aren't crucial to beating the game), bug - turrets still shoot after being removed (via spawn points) until you move past them, some spawn points do nothing useful for you