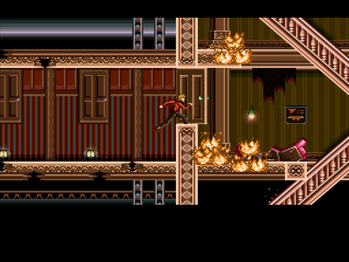 ​
+
Catastrophe theme
Escape/rescue mission
Good sense of vulnerability and impending doom (the ship becomes more wrecked as time passes)
Can call on some NPCs to make them follow you (they're not good at platforming though (have to help them up with the action button) and you have to be fairly close to them)
Pretty impressive music (there's also some ambient fx in certain rooms which adds to the atmosphere)
Climb up or down any wall at a lower than 90 degree angle, layered world (see Goonies 2), four different playable chars (they play the same but a few things make the experience different: different intro story, different start locations, somewhat different paths through the game (sometimes different methods are needed to save certain survivors) and different relatives to save)), three different endings (better if you manage to save your char's relatives, best if you also save the other 7 survivors),

+/-
PoP-style controls but with some mid-air control
No permanent abilites or tools (besides keys and maps)
Unlimited lives but you'll lose 5 minutes (you have about an hour to escape)
Can only progress in some areas if the ship has rocked in the right direction (letting you climb otherwise 90 degree walls) which can lead to some waiting around,

-
Some control issues (can't speed up dialogue and it's pretty slow, can't run, can't make NPCs keep following you automatically, the game is overly picky about positioning when climbing certain platforms)
Trial & error (finding maps, die in one hit from falling furniture like chairs, entering certain rooms makes the ship immediately rotate 90 degrees)
Die from falling about a screen's length
Inconsistent hit detection (fall from stairs if touching the floor above it - have to keep holding up or jump up through the floor)
Can't choose what to say to NPCs
Pretty short (takes less than an hour to escape and not that much longer to rescue the others if you know where they are),