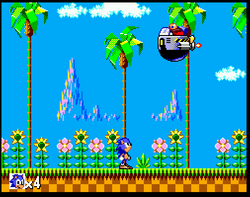 
+
Good variation, bonus levels, quite fast paced, hidden emeralds in the levels (as opposed to collecting rings > entering bonus stage and getting them there), some good bosses (jungle zone), decent length, good art direction and use of colour, different levels and (some) music from the MD version, some alternate paths through levels

+/-
No destructible scenery, no rings when meeting bosses

-
Far from the speed and smoothness of the 16-bit version (slowdown), camera follows you very strictly when jumping making it hard to see where you’ll land, loose scrolling otherwise (the camera lets Sonic run too close to the edge of the screen making it hard to see obstacles ahead), cheap deaths (leaps of faith, somewhat sloppy hit detection in boss fights), the spike bug is present (no invincibility time from spikes after losing rings), some trial & error (the vertical jungle zone doesn't scroll downwards (see Kid Icarus), you have to jump on the checkpoint box again after respawning or you'll end up at the beginning of the level the next time you die), lame bonus round, labyrinth zone is even more tedious here, slow autoscrolling levels, mostly simple bosses (only made hard by the fact you don't have any rings when meeting them), no difficulty options