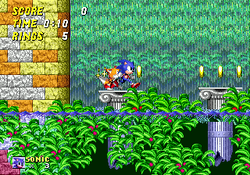 -
No difficulty options
some trial & error (bonus levels, some cheap hits/deaths in mystic cave, aquatic ruin, wing fortress and metropolis zone if you're not prepared)
can't duck into a roll when moving off a ledge or bouncing off a spring or jumping off a hook (leads to trial & error)
mostly simple bosses
somewhat bland competitive 2-player game (simpler and shorter levels)
Tails screws up the bonus rounds if you play alone and have the AI control him, ​somewhat shorter than the prequel (unfinished levels are left in the rom), sonic moves a bit too close to the edge of the screen when running at full speed (rarely happens), minor physics/control bugs in slopes, hit detection is a bit off on final boss (fall through his body into the claws if you don't wait extra long between attacks), difficulty spike on final stage, some tedious level design (large blocks in your way in Casino and Mystic Cave zones, springs that bounce you backwards in the level), before fighting a boss the screen locks you in so you can't go back - it sometimes does this right after checkpoints so it's easy to miss a bonus round if you don't know the level, some non-interactive elements (the tubes in some zones, the barrels in oil ocean zone - Sonic 3 developed on the latter by letting you control the launch and direction), no more hidden bonus points at the end of levels, fewer destructible walls than in the other MD games


Comment:
This is where the series peaked for me as it struck a good balance between speed and exploration, while removing some of the stuff that didn't quite work in the first game and increasing the overall game flow (by implementing the spin dash and better taking Sonic's abilites into consideration). The halfpipe bonus stage is my favourite of the lot, which is kind of a big deal since beating the games without collecting the emeralds leaves me with an empty feeling inside. On the artsy side, the relationship between Sonic and Tails here is the most gripping depiction of unrequited love since Sweeney Todd.