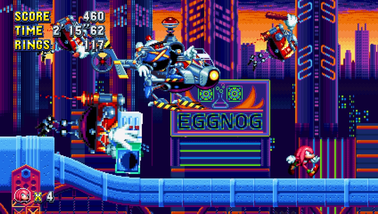 +
New move (drop dash - spin dash as you land by pressing jump again in mid-air (needs to be a decent jump height and you can't do it after going airborne from a slope or spring))
very good bosses overall (several with multiple phases)
tons of nods to pretty much all of the 8- and 16-bit games
2-player split screen (or online play?) in the single player zones
save feature
new special stage (similar to Sonic CD and Sonic R)
expands on several old assets while re-using them (reverse gravity in flying battery if you have the electric shield and move near the magnets, metal sonic chase, metallic madness boss, bomb enemies, hydrocity boss, etc.)
switches the roles for the hydrocity mini-boss and lets you control robotnik's ship
widescreen helps a bit with reacting to hazards while moving at higher speeds, improved animation and color compared to the 16-bit games (also has some scaling and rotation effects plus transparency effects), Knuckles sometimes starts in different spots of levels and one of the bosses is different (fight the robot king in lava reef 2 – still face him again as super knuckles in egg reverie zone), unlockable puyo puyo/robotnik's mean bean machine game,

+/-
Steep difficulty curve for the special stages
re-uses a lot of ideas from the 16-bit games
can't choose to restart a special stage at the cost of a life or all rings (time twisted fan game)
feels like a "best of" cd version of the 16-bit games
better steering with analog stick in the special stages (jumping also helps)
can't drop dash as Knuckles (could've been mapped to a different button), no speed boost to Super Knuckles' flight,

-
​Somewhat loose upward scrolling when inside the bubbles in hydrocity zone
can't turn into a ball after hitting a spring
some trial & error (crushing traps in final zone, some flying robot placements in studiopolis, lava reef mini-boss, some other boss patterns, finding the right path to some later big rings without accidentally hitting something that launches you pretty far in the wrong direction (you can replay the first zone and those big rings will have respawned though), the electric traps in the final zone blend in with the background when moving quickly)
so-so ending animation compared to the intro (need to get super sonic?)
very noticeable pop-in in the special stage
some control issues in the special stage (can't slow down for turns, steering gets weird after jumping into ring containers or hitting springs)
final zone isn't as memorable as the ones in Sonic 2 and 3 (a bit too much of a mishmash of old assets)
not enough new zones
sometimes uneven difficulty (special stages - 6 and (especially) 5 are really tough while the last one is fairly easy, easy studiopolis 2 main boss and oil ocean mini-boss and metallic madness main boss)
annoying how the game cycles the blue sphere bonus stages instead of letting you practice the one you failed
​no halfpipe or spinning maze bonus stages, some boring or undeveloped level elements (slow elevator parts in lava reef and another zone, waiting for press garden mini-boss/oil ocean main boss/metallic madness mini-boss (first phase) to do their thing before you can attack, no paths that only mini sonic can pass through?, too many narrow and rectangular paths in MMZ2), somewhat confusing metal sonic chase scene part (looks like you can hit it when you can't) and lava reef mini-boss fight (need to wait until the shell comes off fully), occasionally cluttered visuals (parts of stardust speedway and metallic madness), inconsistent transition quality between levels (no transitions before the last three zones), somewhat unforgiving hit detection when jumping into item containers in the special stage, unskippable bootup screens and in-game cutscenes, you don’t face robot king as super knuckles in egg reverie zone unless you played the unlockable Knuckles & Knuckles mode,

​
Bugs:
-Can spindash off the airplane in the salon zone (need to rev it up and be facing left, at least at the beginning of the level)
-Can die immediately from falling into the oil against the main oil ocean boss (I think you can get crushed by the platform as it moves down or something even if you fall from above it)
-Invisible goal post (rare, only triggered once)