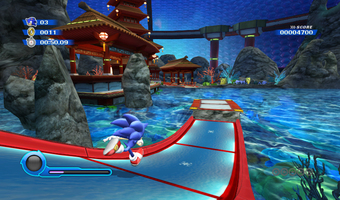 +/- 3D segments borrow heavily from Sonic Unleashed, the retro style in 2-player mode doesn't borrow that much from the classic sonic games aesthetically but rather from the NES era and early arcade games (odd design choice) - some of the level design does though, much easier to get a high rank against bosses than during regular levels, light speed dash tied to the green wisp power (lets you dash along trails of rings), WTF: the hovering Robotnik head in 2-player mode, need to unlock the final stage via 2-player/sonic simulator mode (get the emeralds), the 3D segments are generally very simplistic, slightly worse mid-air control than in the MD games (double jump helps here though), collecting red rings unlocks more sonic simulator levels, blue/cube rings only give points?, you'll fairly often need to kill all enemies in a room/screen to make a wisp capsule or other helpful item appear, can't jump to the sides in some "highway" segments, Sonic auto-stomps after activating the Cube wisp (can make you stomp through a newly created bridge of cubes just before it spawns unintentionally), wisp power capsules generally don't respawn, getting a game over only takes you to the beginning of the current level, need to enter a certain area to access 2-player mode in-game, jump into the ranking/score at the end of levels to increase them (you're basically nagging the game for a better score plus extra rings and 1-ups - either genius or retarded), no shields (electronic, water, fire - see Sonic 3 & Knuckles, however the boost mechanic sort of replaces the electronic one and there's a double jump by default)

- No 2-player for the main game, unnecessary and somewhat unresponsive shake controls (shake to activate the wisp powers) - game supports the classic controller though, 2D segments are a bit too zoomed out, overly cluttered backgrounds for the most part, hard to see some hazards and obstacles (partly because of the clutter), many auto-pilot segments with controllable segments in-between makes some levels disorienting, can't roll into a ball (!) or spindash (unless using the pink wisp power - why?), plenty of unnecessary points of no return (invisible walls!), the spindash-replacing boost mechanic is finite - need to collect wisps to charge up a meter for it (sucks because it makes you miss a bunch of paths just from missing wisps earlier which can really break flow to collect if you don't know the levels well, a quick fix would be to make boost energy regenerate slowly on its own or by collecting rings as well), control problems (some delay when turning around in mid-air or switching "lanes" in the "highway" segments, getting hit by a spike while on a pipe makes Sonic turn around (and I'm not sure how to turn him back again), if you're falling from a jump while trying to wall jump there will be a fairly long delay before it triggers, jumping and especially double jumping slows you down in the 3D segments, in 3D segments where pressing the d-pad left or right makes you "switch lanes" the controls change into regular free-roaming controls if you slow down a bit which can really screw you over in some parts, need to hold down the jump button to spin in when jumping (and to keep Sonic spinning while falling towards the ground - completely pointless change to the classic controls), the rocket wisp doesn't make you float in the air if you hit a ceiling when going upwards, some delay when trying to turn around using the pink wisp power (spindash/walldash), first jump when under water doesn't turn you into a ball, homing attack stops momentum and can get in the way of double jumping, can't spin or double jump after hitting a spring, can't double jump in rollercoasters or after a homing attack, can't control the homing function, can't remap the slide (B - on the back of the wiimote), the swings in sweet mountain are a bit fiddly, being in ball form destroys underwater air bubbles, assist mode mechanic throws you away from the other player when spawning, etc.), no splitscreen option for the 2-player mode, shallow mid-air freestyle mechanic (just mash the jump button and an announcer shouts praise at you - should've been saved for when you actually do something challenging), some trial & error (the yellow spring platform mechanics, can't home in on the wisp capsules, one of the red rings requires you to fall down a pit without visual clues, boss patterns, terminal velocity 1, some bottomless pit hazards, homing mechanic, the turret enemies from Sonic 2's Chemical Plant Zone are unkillable here), Robotnik's comments during gameplay is too low in the sound mix (might just be my TV though?), awkward frog perspective in some vertical platforming stages, checkpoints don't work if both players get a game over in 2-player mode (which easily happens given its other problems), uneven stage length, easy bosses, some tedious parts (having to replay the final boss if you get a game over at the following escape sequence, some waiting for platforms on planet wisp, vertical segment near the end of the carnival zone, switch activated elevator segment near the end of sweet mountain), repeats the useless humanoid robot enemies a bit too much (though in one zone they do have more interesting AI), abrupt ending to Terminal Velocity Act 1 (screen goes white), two of the bosses are simply harder versions of earlier ones, can't play as Tails or Knuckles in the main game, can't manually cancel wisp powers?, no rankings in 2-player, wisps are set free if the power is used where you're not supposed to (the wisp flies away a bit and then circles in place - sometimes you can't reach it again), long staff roll which can't be skipped

Bugs:
-The boost/dash mechanic sometimes glitches out in loops (in planet wisp I once boosted right out of a loop)
-The slide mechanic sometimes glitches out and doesn't let you jump out of a slide (happened once on planet wisp)
-At one point at a "highway segment" in the asteroid world you can't jump when there's a pit if you lightly press the jump button (need to hold it down a bit)