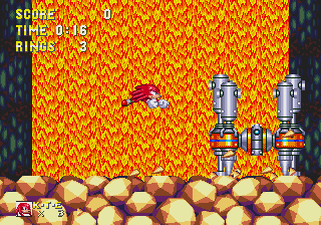 -
Slower paced explorative gameplay (mostly in sonic 3)
some uninteresting levels (Sonic 3's marble garden and most of launch base)
worse bonus level than in 2 (dizzying, hard to tell when it will speed up, trial & error)
some trial & error (enemy placements, boss patterns, some trap placements (e.g. spike ball in flying battery or some fire traps in lava cave zone), cheap death at marble garden - out of sight pillar trap is out of sync with on screen pillar trap)
mostly simple bosses (flying battery and sandopolis mini-bosses especially)
​can't use the special shield powers as Knuckles, no difficulty options (however you can play as Knuckles for a somewhat bigger challenge), your character auto-stands when hitting a spring (and you can't turn into a ball again in mid-air), as in Sonic 2 the game locks you in when close to a boss - making you unable to backtrack and possibly missing stuff, more semi-automated parts (Hydrocity, Death Egg, Launch Base), can't turn off super/hyper form, minor physics/control bugs (not being able to climb a ledge, not being able to climb moving platforms), not much thought behind Knuckles ability to punch through walls (can't even use it in marble garden), can't start gliding after hitting a spring as Knuckles, Knuckles' game is cut short (ends at sky sanctuary), underwater controls still kinda suck as Sonic or Knuckles, some slow parts (elevators in mushroom hill and block pushing in sandopolis - less of a problem when using Knuckles or Tails), minor hit detection problems around loops in ice cap zone, no in-game transition between Sonic 3 end and S & K beginning, large knockback, springs that bounce you in the opposite direction you want to go, the automated 'light tunnel' segment in death egg zone

Knuckles can't jump off of spikes and the stone platforms in Hydrocity?