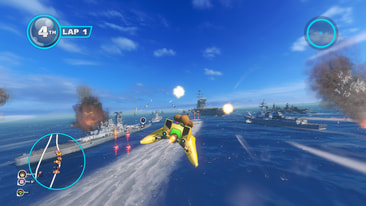 
​+
Very good variation (each course has you drive a car, a boat and a plane; good arsenal of power ups)
Great sense of speed
Drift mechanic (also gives a boost after a period of time - small or big depending on how you long you can keep drifting and the level is indicated by a colored exhaust from the kart)
Pretty large character roster
Rear view
Features cameos from most of Sega's best/most memorable games (panzer dragoon, after burner, monkey ball, even alex kidd, nice remixed music tracks overall)
Difficulty options (easy-hard)
Plenty of unlockables (courses and chars, stickers..)
Challenge courses inbetween normal ones in world tour (career) mode (drift challenge, )
Basic leveling system (unlock modifications you can choose between before each race)
Strafe/sideroll move (in mid-air - can perform it near obstacles for a "risk boost" which feels rewarding), perform jumping tricks (give a speed boost), can fire backwards and forwards as well as let go of all ammo at once by holding down the button, Ryo's car (Outrun cabinet), timing the countdown at the beginning of races will give you a boost (in some challenge courses it is disabled though), alternate (sometimes hidden) paths, control options (invert stunts and vertical flight stunts, vibration, flight assist?) and detailed audio options,

+/-
Kinda hard to dodge enemy fire
Can't play as Ristar?
Pretty forgiving hit detection around power ups and boost pads
Cheesy commentator voice (less exaggerated than in the prequel though)
All-star mode (collect rings to become temporarily invincible and able to attack a few times)
No coin/ring counter during races (used for one armed bandit mini-game which can give an item to use for the next race)
Can't hand over gained experience with a fully leveled up char to other chars (you'll reach max level well before the end)

-
Some trial & error (boost mod mechanics, overheating, no drift or trick or shot explanations, sometimes hard to read a track (night courses mainly))
Can't quickly quit the game? (need to go back 5+ times in the menus) nor quickly re-enter where you were in world tour (career) mode?
Overly harsh punishment from crashing at times (in the Colors-style level I got stuck for several seconds hitting part of a road while trying to drop down to a lower level, camera should've probably been auto steered towards the course (or at least there could've been an arrow) when crashing or going off course as a plane)
Some annoying voice clips and all-star themes (you'll hear enemy all-star themes as well and they're fairly loud at that)
30 seconds of unskippable logos on each bootup
Sometimes uneven difficulty curve (and how much you get hit by opponents can vary a lot)
Can't change kart mod between tries after failing a race without going back to the course map screen
Too many stars required to progress in the last cup - need to switch to hard mode (this cup is unlocked after the credits though)
​Finishing all career courses on expert just gives you a congratulations screen and unlocks a console mod for one char (getting all stars gives you a very short one showing a star icon - better but still meh)
Repeats some locations
​Too much downtime between races in matchmaking MP (about 1.5 minutes longer than the races themselves it seems), earthquakes can affect you in mid-air (skies of arcadia course), some so-so courses (billy hatcher course - end of course turns and shortcut route at the beginning, casino course – except for the boost challenge version, parts of panzer dragoon course ring challenge, parts of the burning rangers course are too narrow and zig-zaggy), no ending cutscene after beating what you can in career mode on normal difficulty nor hard difficulty (also no credits from beating the hard mode courses),

​
Bugs:
-Sometimes glitchy hit detection in MP (I’ve run through power ups sometimes and at one point I couldn’t hit an opponent with ice shots – may have been a hacker though? But that’s also a problem if it’s the case)
-Sometimes crashes when using matchmaking online
-Mod selection sometimes reverts to standard in-between races if you've changed characters,
-Sometimes the game picks A class automatically right after you've failed a B class race
-Sometimes the game goes back to the course select map when you've picked retry after failing a course
-Your car sometimes crashes during transitional cutscenes (pursuit courses for example) - no effect on gameplay but looks bad