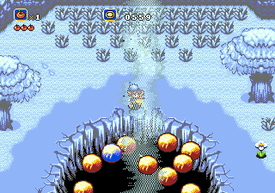 
​
+
Talk to and get help from animals/plants (running, swimming, elemental attacks, smart bomb, control your sword in mid-air, life refill, extra platform, etc.)
Sword throwing
Pretty good enemy variation (some are repeated in a few areas though and enemies are just stronger versions of themselves in the 'past' areas)
Save anywhere in neutral areas
Some interesting puzzles (desert, babel tower, submerged city/ice temple, desert palace, final dungeon)
Bright and detailed graphics with unusually well blended colors
You can run and jump fairly early in the game (makes the game much more fast paced - running can even get an upgrade making you reach ridiculous speeds and manoeuvrability while jumping)
Get turned into a monster (and hunted by humans) at one point
Less formulaic than Zelda
Hidden items (max hp upgrades)
Some nice visual effects, imposter mom sidequest, some interesting bosses (Baron, Puppet Master, Five Senses), some decent jokes, makes good use of most of the animal helpers, in-game outro (can't do much in it but it's a nice touch, takes place right before the start of the game in an alternate present)

+/-
The dinosaur can help you swim to the ice temple on the world map but not swim a few meters to the lion outside the temple
Racing mini-game (not that fun)
No life drops from enemies (refill after each boss and from some NPCs)
Somewhat slow attack speed (gets upgraded later but you need to use 1 of only 2 animal slots for it)
No way to save the desert people from their tyrant leader? (the bird saved after the chameleon boss talks about doing so but then you just get thrown into prison over and over when trying to)
The time travel aspect is very controlled (do a few linear quests and upon each one's completion get auto-teleported back to the present despite the game implying you'll have some control over the process by using magic shoes)

-
Slow start (slow walking speed, backtracking, some dead space)
Unsatisfying feedback from swinging your sword and hitting things like rocks and bushes (no sound effect for swinging your sword and some other actions, weak sfx for hitting enemies and they don't flash, some other actions have weak sfx or lack them completely)
Hit detection is somewhat off (enemies above the player hit one "step" sooner)
Simple and easy bosses overall
Some tedious parts (wind area (anemone island), last part before leviathan boss)
Generic art direction on most enemies
Dialogue errors (Cory the other hero's dog)
Some more backtracking later on (triggering the event where the dinosaur gets convinced to help you)
The room in Babel tower with a skull on the floor (no hints on what to do - need to jump in the southern corner to the right)
Some translation problems (the talking rug, parts of the intro, the bit at Babel tower, etc.)
Some animals should've just given a permanent upgrade (or one activated separately), some dull parts in the training area, need to talk to the kid (Chai) in Iris village three times to trigger the flower near the crater to tell you about the cyclone (leading to the past where you find the magic shoes), no clues on how to open the locked house in the animal village near the beach (in the past) when you're trying to convince everyone to fight (needed to progress the game, you also can't join the monkey when he goes to fight Baron and the clue to Baron's location here is wrong (an elephant says it's in the desert - need to talk to the flower at the beach instead and then comb the beach for his hiding spot), story oddities (why does the monkey who fought Baron in the past think that the other animals did a good thing letting him go alone just because they went and fetched him after he was beaten up?, poorly conveyed message in the story (the game really tries to hammer in the idea of the monsters not being inherently evil but it's not consistent with what happens and gets tiresome after the first couple of times, in the end you end up sending them back to their world yet somehow this teaches humans to be more peaceful and open minded), uneffective Soleil past scenario (the monster 'invasion' lacks fitting music and NPC behaviour and besides, it's silly that the player's footsteps would scare the monsters out of the castle - or that you can't react to them while they escape), mother monster boss/dungeon in dahlia valley's past (boss just sits there and the dungeon is boring - seems like it should've been a timed escape sequence?), exploding egg animal (smart bomb) doesn't work on bosses? (one of the few times you'd want to use it), easy final boss, no door animations


Notes:
Hit detection bug near a wall in mother monster's dungeon (you can pass through it by charging and/or spinning around near a corner in the dungeon)