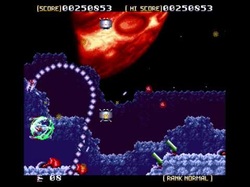 + Unlimited continues, decent intro cutscene, speed options (in options, not in-game), difficulty options, some good bosses, respawn on the spot (you're also given a weapon capsule after death)

- Trial & error, slowdown (the twitchy kind), basic and rigid weapon system (need to move around to change the formation of your side-turrets instead of pressing a button), uneven difficulty (third boss is very easy, hard to recover later on since you begin at your weakest after using a continue), some distracting backgrounds (makes shots hard to see),