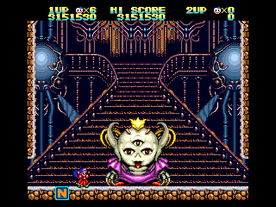 
+ 2-player co-op, decent cutscenes (re-uses some backgrounds and scenes for both the intro and ending though, and there's no staff roll after the ending?), some innovative mechanics (turn enemies into snow balls which you can then kill other enemies (if you manage to kill everything in one go items worth a lot of points appear) with or use as platforms (you can also push them around to position them strategically), inflated mode (basically an invincibility mode - you become twice as big, can fly around and touched enemies die immediately), secret areas? (spell Snow by first collecting the snow bro icon making blue blobs appear, then collect a letter from them, then you'll enter a secret area), good bosses overall (harder and somewhat more complex than in Bubble Bobble), large and expressive boss sprites, gender twist - there's a fake final boss after 49 levels and afterwards the roles get reversed (the bros' princess girlfriends (?) have to rescue them instead), password save (short), pretty good length (70 levels), difficulty options (easy or hard), somewhat improved sound compared to the arcade version

+/- Limited continues (3), heavily inspired by Bubble Bobble (controls, stage design, physics), somewhat forgiving hit detection, some invincibility time is given if you can bounce a snowball against a wall or a second ball, graphics get a bit better some ways into the game, slow movement before upgrading, the all in one bonus items (gray blocks) disappear very quickly, hidden time limit until a ghost appears and tries to kill you

- No auto-fire, slow falling speed, can't jump down through platforms you can jump up through (you'll actually get stuck in some parts past level 30 due to this, could've also been solved by letting you create small platforms from the snow you throw or something), somewhat uneven difficulty (you're at a severe disadvantage in some parts if you die, third boss is pretty tough (the two birds), the fake final boss is pretty tough, and the levels following it are easier than some previous levels), sometimes so-so color choices and character designs, some trial & error (boss patterns, figuring out what the power ups do and how to get to the secret areas), the fake princesses look a lot worse during the fake final boss than they do during cutscenes and when playing as them