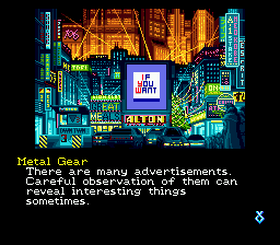 
+ Good sense of humour, very cinematic and stylish, good voice acting for the time, light gun action sequences break up the monotony (too bad these scenes are so rare), dark cyber punk atmosphere with a good amount of fluff (creating an immersive world), memorable locations and characters, a well done depiction of a couple drifting apart, good length, impressive soundtrack and ambience, the video phone, secret optional events, influenced by Blade Runner and Terminator, lots of gore (and some jokes about it such as the autopsy part), minor horror/surprise elements that might've influenced Resident Evil, good use of colour (often close to the system's limit)

+/- You can get stuck if you behave very badly? (get kicked out of Katrina's house or Outer Heaven), very linear, heavy on cutscenes

- Too many (and too long) monologues (Act 3 is almost an anime made of stills), advancing the story forward sometimes requires a certain number of actions instead of searching for/saying the right thing (Katrina’s house after she’s been attacked) so even if you know what to do it will take a long time doing it (you often have to repeat commands for something to actually happen), plot exposition that often underestimates the player’s intelligence but sometimes also speeds through important parts in non-subtitled monologues, unskippable cutscenes, the Oleen puzzle (why would an advanced robot take such a crap picture? And the clues suck until the chess piece is both mentioned and shown – At which point the puzzle is ruined), plot devices (not being able to access the memory chip in act 1, seemingly logical conversation options being kept away from you, Harry doesn’t contact you about Benson etc., some ridiculous plot twists (the three women knew each other and spoke for most of the game? The Seeds had a red headed child who looked nothing like them), inconsistent character art, only 4 save slots, no notable side quests or difficulty options, dated and somewhat strange interface (look and investigate are synonymous and often lead to a random action when used such as “take” or “open”)