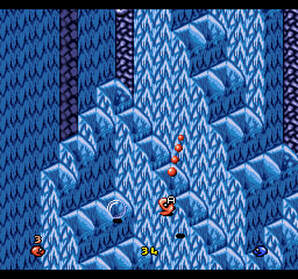 +/- Collectathon element (need to be at a certain length to open the exit in most levels - the game notifies you more clearly when you're big enough in this version), collectathon bonus levels (meh), level timers (can be increased by collecting the clocks), one negative power up (reverse controls), no strafe/dodge/block moves, isometric perspective, have to stand right next to lids to open them regardless of your tongue length, can't jump while standing on a waterfall tile, tongue length is reset between levels, can't jump while standing on a bouncing lid (could've been used to jump a bit higher), some delay on power ups received from lids (have to watch them go up and down in mid-air - breaks flow a bit but is also necessary for the bomb traps not to be cheap), some of the platforming is a lot more difficult in 2-player mode?, limited continues (can gain a few during the game though),

- Die immediately from falling too far (3+ tiles - pretty annoying and sometimes inconsistent (in level 2 you can fall 3 tiles without dying at one point)) and from spikes+weight traps+foot stomps - at least you respawn on the spot and don't lose any body segments, several tight platforming parts where you have to replay a longer segment if you fall down, some control issues (your avatar hops slightly after each attack (besides when spamming attacks quickly) and this can interrupt your jumps, everything is tilted by 30 degrees so holding top left makes you move straight north, can't adjust your jump height, can't jump onto water fountains to bounce off of them (have to stand where they appear instead) - breaks flow, the chewing animation after eating a ball delays your next attack so you can't quickly eat a bunch of balls in a row, pretty long knockback animation when hit), no options menu, so-so sfx overall (the "bonus level found" sfx is an exception) and the music while having more appropriate sounding instruments (50s rock and jazz) isn't really better than on NES (no samples/PCM or PSG used either), some trial & error (sometimes it looks like you can fall down to a platform at the edge of a level but it's really a death trap - these parts should've been redesigned or the game should've shown more clearly that you can't jump there, helmet won't protect against falling, can't jump on the foot enemies for some reason, some mechanics), some foot enemies take forever to kill, sudden difficulty spike at levels 6 & 7 (no way to restore/increase health), somewhat generic looking enemies overall, plays the 1p vs 2p point comparison and victory animations in 1-player mode as well unskippable), the ice level also has some of the most challenging platforming in the game,