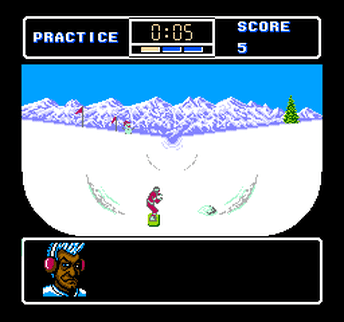 +/- Timed halfpipe and downhill events (on practice mode as well),

- No control instructions, unintuitive and sluggish controls in the ski jumps event, not enough speed in the toobin' event and the camera centers the avatars making it hard to see what's coming (the latter is a problem in downhill as well), odd point scaling in snowboard halfpipe  (performing a trick better if you already did it once doesn't increase the score but switching sides does (but only once)), too hard to perform 360 and 720 jumps in the halfpipe compared to the other tricks, can't revert in trick level in the halfpipe (makes it a bit too repetitive for 2 minutes of play), too hard to avoid the logs and rabbits with chainsaws in the halfpipe (they could've let you turn these obstacles off in the practice mode), sometimes odd use of color, no 2-player except in innertube trash?, can't skip in-game cutscenes or the pauses between the judges' evaluations