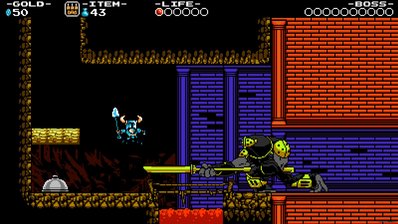 
​
+ Pretty fast paced, plenty of hidden items, SMB3 style events on the hub map (optional encounters popping up as you progress), save anywhere on the hub map, castlevania/ducktales/zelda 2 inspired gameplay, good bosses overall (mega man style), multiple save slots, good platforming puzzles here and there, pretty good variation, some alternate paths through levels, good art direction overall, sub weapon/item (relic) inventory, upgradeable health and magic meters, some choice in which path through the game to take (pick between two levels at a time), armor and weapon upgrades (most of the armors have both a pro and a con), some fun gear (fishing rod, air dash gauntlet, temporary invincibility (phase locket) when used in puzzles, bouncing coin that gives you more gold from enemies), decent dialogue (makes the bosses a bit more memorable), some creative level gimmicks, control and sound options, optional mini levels (where you use a certain item to get through it), some projectiles can be bounced back into the enemy, 60 fps, play alongside shield knight (cpu controlled) for the final boss fight, includes the Plague Knight campaign (beat the game to unlock - plays rather differently to Shovel Knight and a bit similarly to how you play in Toejam & Earl 2, also has a new set of gear/relics), nice intros and pretty good ending cutscene (skippable, uses only in-game graphics though unlike the intros), new story and partially different levels for Plague Knight's campagin, good menu interfaces, double jump and hover jump (can be canceled by pressing down) as Plague Knight (has a shorter default jump though so you'll frequently need to use charged bomb blasts to launch him forwards or upwards), new treasure absorption for Plague Knight which you'll get a few levels into the game (only need to charge while wearing a suit that you buy - permanent upgrade), you can take over the second village as plague knight, fight shovel knight in plague knight's campagin, new final boss as plague knight,

+/- NES-style visual and sound limitations (except with more animation, parallax, no flicker or slowdown, VRC6 audio expansion, widescreen, a couple of extra colors here and there), unlimited continues though you'll quickly run out of money from dying (can exit the level or quit and reload to restore from before starting the level), can replay beaten levels but you also need to beat the boss for the progress to save (annoying when collecting missed music sheets or green coins), can't down stab attack treasure piles, can't enter doors in the villages, the temporary invincibility (phase locket) item is pretty overpowered if you boost your MP, relics (sub items/weapons) that you find in the levels need to be bought and can be a bit expensive later on (you can buy them in the first village after beating the level but for a higher price), plenty of pits and spikes (which kill in one hit), can't change armor without visiting the blacksmith, no quicksave (fairly long levels - almost twice as long as in castlevania and mega man on NES), unlockable hard mode/new game plus (fewer checkpoints, double damage from enemies, less health; keep previous upgrades - could've had new level design and enemy patterns), gold loss system (similar to dark souls) encourages spending but there's not that much to spend gold on after ~5 levels (several of the armor and weapon upgrades aren't that useful), no penalty for refilling the chalices over and over? (hp/mp refill, 10 sec invincibility, gold absorb) - too good vs bosses, small delay when attacking (like in Castlevania but shorter), no new music for plague knight's campaign?, can't play as Shield Knight, you can (temporarily) kill your minions as Plague Knight,

- No co-op mode (some new abilites for player 2) and no exclusive content in this version, some power ups alleviate problems that could've been fixed from the get go (absorb treasure power up - it's free from the troupple fish but you can only hold two and if you died in a pit (which is the main cause of death) you often can't reach all the gold after losing the ichor, anti-recoil armor (there's Zelda 2 style recoil when you hit enemies) also makes it harder to stop and is fairly expensive), often can't go back a screen or two to be able to reset a room and retry a platforming puzzle, can't use a checkpoint after dying repeatedly if you broke it to get some extra money from it (means you can't recover the money you lost the first time) - would've been a good risk/reward system if it only happened once and then they were restored (without respawning their gold content), inconsistent bouncing on objects and enemies and you can't shorten the bounce off of an enemy by not holding down the button, trial & error (some music sheet locations have no visual or dialogue clue, killing all the knights in the hall of champions as plague knight will teleport you out of there without letting you get all coins and the music sheet (can pay 500 to do another challenge there and get them then though?), can't see your charge up in the dark as Plague Knight (needed for blast jumps), airship level (wind segment), bubbles do damage in the air dash cave, some of the bouncing puzzles in the mole knight level, points of no return in levels, some cheap enemy placements, boss patterns, ), digging to get to money feels gimmicky and slows down the pacing a bit (works better in the auto-scrolling mini-game style levels since you're under time pressure) - chest opening animations and fishing also slows you down a bit, plenty of village dialogue doesn't update properly, some odd color choices, sometimes uneven difficulty curve (peaks: last two levels before the final one, specter knight, dips: final boss (still a cool fight though), flare wand takes out some enemies too easily, tinker knight, treasure knight, early griffon mini-bosses, king knight), static difficulty (changing the order in which you beat a level doesn't change its difficulty), auto-saves after a failed hub map encounter, using the fishing rod to fish up dropped gold is a bit iffy (fishing in the underwater level can also be tedious as the fish will sometimes swim around over a pit and not be catchable), some sub weapons/abilites (relics) are a bit too similar (dash gauntlet and dash sword, chaos sphere/green ball and alchemy coin), the mobile gear relic is too situational, some unskippable cutscenes (mostly short though), minor delay before you can push the button to start charging a new charge attack (not there when playing as Plague Knight), Plague Knight is kind of slippery (slower turns and walks a couple of steps after letting go of the d-pad, hard to stop the momentum of a blast jump), sometimes inefficient default attack as Plague Knight (can't hit short enemies directly in front of you, can't shoot upwards or downwards) - can be upgraded after a couple of levels though, can't cancel/set off the sentry bombs if they're too far away from enemies (can still semi-hover using the attack move though), no quick cycling of bomb casings (affects trajectory) for Plague Knight, inefficient big bomb sub weapon/arcana in that you can't steer the throw, difficulty is more unbalanced as Plage Knight (generally harder platforming (unless you combine the vats/created platforms and float jump later on) and easier bosses),

Notes:
-Doesn't work with my USB SS/N64/PS2 controller adapter (and you can't use joytokey properly either)