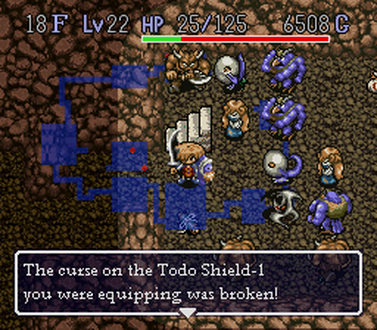 
​
+
Rogue-inspired gameplay (enemies move when you do though you do take turns here, randomly generated dungeon, various item mechanics, resource management, line of sight mechanic (D&D: Cloudy Mountain?), can throw most items at enemies, regenerate HP - can regenerate faster while being vulnerable to enemies (a+b))
Nice art direction and cutscenes
Medieval Japan setting with mythological elements
Map system (semi-transparent and can be shown while playing similar to Diablo, show items and (using a scroll) enemies, very good but could've shown where a path ends and let you mark locations)
Can examine all identified items
Facing mechanics (getting hit from the side or back is more dangerous) - can turn while standing still without wasting turns by holding a button (similar to Diablo)
Certain scrolls can reveal a dungeon layout completely (single use)
Run/fast forward move (moves you to the end of a straight path (or adjacent to a room entrance/exit or next to a monster or next to a wall/object) instantly, makes you skip picking items you move into?)
Automatically pick up items until your inventory is full (can also manually pick up or immediately fire projectiles fired at you but blocked by your shield)
Random teleportation item (some enemies can also do this to you)
Enemies are also affected by mine explosions, some enemies can kill other enemies (this can even level them up), no default fog of war when outside (some enemies can remove your sight temporarily), NPC encounters in dungeon areas with side quests, can turn monsters into meat and then eat it to turn into that monster (can also throw the meat at a monster or NPC to transform them), can increase your stomach size by eating when full, shops and smithys, save (and quit) feature, can use items on and even kill villagers, improved diagonal movement, outdoors dungeon areas with non-rectangular rooms, some interesting enemies (some enemies leave ghosts that possess other enemies and make them stronger if you kill them, some enemies can transform you), some memorable characters (Pekeji), new weapons and shields show on your avatar, pretty impressive music, good variation, various interesting items (blank scroll - name it any scroll you've used before and it will have that function, transform pot - put items in it and throw it against a wall to randomly make new items, a pot that cages enemies, dig through walls with the pickaxe, bargain bracelet, can hide from monsters by going inside hiding pots, buy-time staff - paralyze and warp monsters to the exit of an area, can steal from enemies using a Todo pot, shields that prevent theft and hunger, etc.), spells (via scrolls), some ambient sfx, optional puzzle dungeons accessed from the first town (win one item per finished dungoen, however your current equipment disappears when entering), after dying once you'll meet NPCs who'll take you to the next visited town (you'll likely want to travel by foot to level up and find new items though), inventory sorting (Y),

+/-
NPCs in the first villages act as walking tutorial messages (useful but could've been intertwined with gameplay)
Starts off fairly tough
Dying means getting sent back to the previous village and losing your progress (including all gold) - can put items in a warehouse pot to keep them though
Need to identify certain items and eat food when hungry (there's a ring you can find which removes hunger completely?)
Can name unidentified items
Some enemies will start following you from off screen while others just stand around until you attack
No town maps
Two enemies can steal from you and then warp to a different part of the floor and try to avoid you (in this game there's a shield that prevents this though)
Save anywhere (better to save in town since you only have one slot)
New monsters will spawn after a certain amount of actions are used on the same floor
Can only use the smithy once per town?, can't drop items on top of each other (unlike in the prequel you they don't end up on an adjacent tile - instead you can't drop them), tile-based movement, limited inventory (20 items, herbs don't stack?), very hard escort quest (if you encounter a tank she'll probably die), gear deterioration (from digging, certain traps - some gear is protected), you can get a free big riceball from the bartender in the first town, your animal sidekick doesn't follow you in-game when outside of towns (his only function is to translate animal talk in towns?), weapon corrosion attacks (can lower all regular gear's bonus down to -3 - can gild the item with a plating scroll to protect it but you'll have to find it first), can't regenerate HP in town (have to use an expensive inn), have to die to progress certain events, the final boss/only boss can end up rather easy if you get lucky with a confuse scroll,

-
Can't backtrack at all except accidentally via pitfall traps (the game would be more fun if you could either backtrack or if your current items were dropped where you last died so you could pick them up if you got there again plus resting at an inn made that the new respawn location)
Herb of sight/warehouse pot/messenger NPC (have to die once?)/arrows are all too rare - on my first run there were no messengers or warehouse pots until the trials
The random elements can make playthroughs much easier or harder depending on where certain items (food, warehouse pots) are placed (increases replay value but could've been balanced better) or if you miss or hit (also goes for traps) or which enemies you'll encounter
Plenty of dead space and dead ends
Inconsistent line of sight (one tile long in corridors, entire room after entering it, can't look into a room from right outside it) - leads to surprise attacks in corridors when you don't have arrows to scout with
Time limit on the explanation text that pops up when picking up an item and very short time limit on the effect text when using some items
Odd translation for a few things (took damage=dealt damage, put in=put an item in this pot)
Stiff movement near walls and other objects
Somewhat annoying beep sfx during dialogue
No Outside scrolls (for backtracking)
Your avatar holds swords in a weird way, spells hit NPCs too (the girl you're escorting for example) - can't check the escorted girl's HP, no item merging or NPC party members?, dungeon rooms are always box shaped?, heavy trial & error (only get one shot (per life?) to loan money to your bro?, bigroom scroll doesn't work outside?, can't throw pots against bush walls, pickaxe breaks pretty quickly from digging, enemies that can curse your gear, arrow kid can move and shoot in one turn, if you choose to restart from the first village when loading you lose all levels and items besides what you've put in the warehouses, a thrown item disappears if you hit an enemy with it, if you stay on one floor for too long you'll automatically drop down via an earthquake?, surprise attacks in narrow paths?, traps are only reliably detected by Torch scroll (in-game but not on the map) which is usually pretty rare - can be detected with your sword but it's a dice roll and you're likely to walk into most traps since there are no visual or audio clues and monsters don't trigger them), plenty of mundane loot, silver arrows don't end up on the floor if you don't hit anything (unlike wooden ones)? - why?, still can't attack diagonally around corners but can use staffs this way, no item that lets you keep some experience after exiting the dungeon?, still can't see how a piece of equipment affects your stats without equipping it nor how much experience you have left until the next level, difficulty spikes?), few puzzles in the main game (besides combat itself), sometimes the game spawns islands with items on them in dungeons which you can only get to by being randomly teleported there


Bugs:
-Can sometimes not encounter any warehouse jars in a run?
-Hiding pot only works once despite having 3+ charges?
​