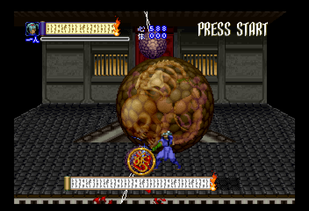 ​+ 2-player co-op, Alisia Dragoon-like attack (auto-targets nearby enemies here, can switch targets with Y but not to enemies outside of your limited "field of vision" - have to be facing them and be fairly close, can charge it while moving but not shoot normally while moving - using a charged attack on an enemy causes a chain reaction if there are others nearby), sometimes intense action, very good variation, some creative set pieces (the teeter, the spinning room, the raft, fight inside a giant frog at one point (similar to NewZealand Story or Yoshi's Island), etc.), good bosses overall (many large and detailed sprites - some made up of multiple parts, some have a second phase) and there are lots of them, difficulty options and control config (in japanese unfortunately but you can find a (partial) translation at GameFAQs, easy-hard, number of lives (up to 5) per credit, partial control config - can only change what buttons A-C are mapped to), slide move (can't cancel out of it though and you can still get hit plus there's a bit of delay before it triggers), block move (can be used in mid-air but not while sliding or walking, blocks in all directions like a temporary magical shield and knocks enemies back a bit as well), great art direction overall - dark japanese mythological theme (similar to Mystic Defender or Devil Hunter Yohko), blends 2D and 3D backgrounds pretty well, some 2.5D gameplay (second ship boss, spinning room boss), mini-bosses, two playable chars (a ninja and a soldier (?) with a straw hat - the ninja has the chain reaction on charge attacks and the soldier has longer range (the ninja seems better overall)), respawn on the spot, can see enemies' crosshairs as well, can see bosses' healthbars, levels transition into each other without pause (no loading times), can crouch while shooting,
decent intro and ending cutscenes,

+/- Can take over enemies and have them fight for you until death (they're pretty inefficient though and you can only take over a few enemy types (the ninjas first seen in level 1, only one enemy at a time as well) - they're better used as smart bombs (Z), can run but not shoot at the same time (this also lets you jump further though it's rarely useful), can't move backwards/strafe nor move backwards in levels, respawn on the spot even after using a continue, some gore (actually shows a kid being beheaded before one boss - but the kid is the boss!), lose your charge when hit (MMX) and it takes relatively long to build back up to full strength, no alternate paths and very few hidden items (just one 1-up?), pretty long knockback when hit in mid-air, no time limits, the ghandi-like boss is creative but kind of tedious (too hard to quickly change targets to hit the weak points on the larvae), limited continues (4),

- Difficulty spike in the final level (long boss gauntlet), some control issues (the crosshair moves too slowly when turning around, the block move doesn't trigger if you're holding left or right, the crosshair hovers too close to your char (makes it hard to judge how close you need to be to shoot an enemy) and your range isn't that good as the ninja - also if you charge a shot and let it go while nothing's in range (which can happen quickly as an enemy moves) it's wasted which is rather frustrating, can't adjust your jump height and jumps are a bit floaty, no auto-fire for regular attacks - could've been mapped to its own button, stiff slide move (can't cancel it), ), can't attack enemies that are more than halfway off screen, most enemies take too many hits to kill on Normal (breaks flow and kills your thumb since there's no auto-fire - seems balanced for 2-player), no life refill after bosses (not even HP drops), trial & error (most boss patterns, some cheap enemy attacks - during the autoscrolling stair segment and the falling segment for example), starts off kinda tough and HP drops are rare, cheap samurai ghost boss (too hard to tell which part is vulnerable and it changes over and over),


Notes:
-Played with the default 3 lives per credit on Normal at first
-Choppy sound in Bizhawk
-Options translation: https://gamefaqs.gamespot.com/saturn/577691-shinrei-jusatsushi-taromaru/faqs/21832
​