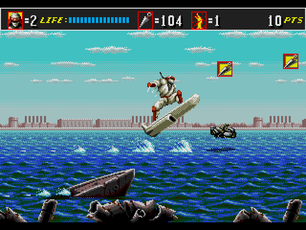 +/-
Some parts are much easier when powered up

-
Lacks some of the atmosphere of the prequel
some tedious segments (vertical scrolling levels, climbing via the ceiling is pretty slow)
takes a while to learn somersaulting
some trial & error (bosses, last level, off-screen enemies (can be shot at from off screen though))
one AI bug (Godzilla robot)
​can't cancel a wall jump (you'll sometimes perform one when trying to somersault and it launches you to the side quite a bit), a few cheap hits (falling boulder trap), no dual plane action (over the fence jumping - Revenge of Shinobi), if you're standing on a platform above where a box is you can't use your shuriken (land mines level), barely any difference in challenge between normal and expert for some levels (horseback and surfing)