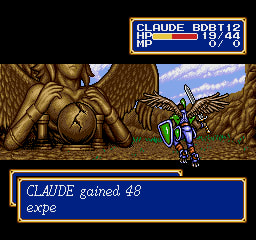 ​
​
*Scenario 4/museum battle (normal w/o grinding)
+
3 scenarios/books (choose one at the start menu, the first two are based on the first two GG games; book 3 is short at only 6 battles but lets you pick between nearly all chars from the previous books) as well as an unlockable bonus scenario consisting of a single battle where you face every boss in the game
Difficulty options (easy-very hard, easy is default but I played on normal; can also pick between easy and hard for one batte during book 3 - evil clone/shadow battle)
Decent intro and book 3-4 endings (SML2 style)
Adds a hub/camp area from the get go (similar to Shining in the Darkness; can change party members or equipment, can shop at some locations, can talk to members for a short introduction comment, set members to auto-battle (the AI isn't great though), cure status ailments and save+promote chars)
Somewhat improved AI over first game
Nicer battle sprites overall
Wind element added (only other new spells are stronger versions of blaze and bolt though; SF2 adds earth and water elements)
2 secret chars in book 1 (Domingo and Amigo) and 2 in book 2 (Higins and Rush)
Equipping an item or using one that has no effect doesn't waste a turn
Some interesting level gimmicks (lose all your items after the first battle (have to scavenge wooden ones in the next one but can then rebuy gear after that), no magic can be cast until the Fizzle Ball is destroyed during battle 15 in book 1, have to equip and use a certain sword during the final battle to be able to damage the boss, sudden environmental changes during battle in book 2 (lava cave) although you don't really need to worry about it, minor stealth segment of sorts in the death balloon/moving mine battle - pass by them without attacking them or getting too close to not have them explode in your face, in one book 3 battle there are walls being built as the battle progresses)
Can equip a weapon while buying it+can see how a weapon affects a char's stats in the shop menu
Level stats from books 1-2 are transferred to book 3 unless a char is under a preset level in your saves (book 2 data takes preference over book 1 data for the book 1 chars returning in book 2)
At one point during Book 2 your force gets split in half and later reunites
Various hidden items in book 3 (they tend to be placed in a way that gives a visual clue though considering they weren't in previous books+barely existed there you could've been notified about them being common in book 3)
Comedic tone in book 3
From SF1: Accessories with spell/skill effects (SF1) - can break but also be repaired here, Respawning enemies at times (SF1; helps with not having to egress to level up as much), Map view (SF1; C while not selecting anyone), New sprites for promoted chars, Animated dialogue portraits


+/-
Save feature (at the hub/camp, one slot per game), Suspend game option (at any point during battle?)
Can use egress to escape from any battle to replay it and grind levels as much as you need
Linear structure and no alternate objectives during battles
No perma-death
Party members can pass through each other during battle and AoE spells don't hit friendly units
Boost now has the agility+def effect of Quick in SF1 while Attack has the previous Boost effect of increasing AP
Dispel=Silence and Desoul=Death
No wait or defend command (could've helped against the random double attacks, critical hits or double turns)
Status spells sometimes fail and don't give as much exp as damage spells when they succeed
No treasure or enemy drops during some battles
No hidden items in book 1 (two hidden chars)
Spells generally do more damage to your party than physical attacks (no magic defense stat?)
Poison is pretty weak and can't be used by the party
Better to promote as late as possible (lvl 20 unpromoted is optimal) as you'll gain more levels in total. Lvl 20 is max* after promoting so it's potentially 10 more levels than if promoting at lvl 10. At higher unpromoted levels you start gaining less and less exp from enemies - around lvl 16-17 your chars start gaining only 1 exp from killing most enemies as well as using healing items so it leads to grinding if you want to max out your stats+you can't swich to the best weapons as quickly as they require promotion+spellcasters spend more time not gaining new spells after promoting
Promoting makes a char weaker initially (SF1)
The mushrooms in the tunnel are an interesting gimmick except sometimes they can appear and attack immediately - would've worked better if there was a one turn timer to take them out
The deals feature in shops is pretty underused (can only buy back sold rare items)
Can't cast an AoE spell on the ground between enemies
You only buy weapons, accessories and healing items (not armor or spells)
No spell that increases movement points and you there are only three items in Book 1 that increase it, two of which are consumables with a random effect of 1-2 points. In book 2 there are no such consumables and in book 3 there's one. Would've helped with some battles dragging on or some chars taking longer to level up+could've rewarded saving up money for them and getting them via the "deals" feature
Healing rain is pretty OP and archers and fliers are a bit OP
While some book 1 chars return for book 2 their level stats don't carry over there (the level data transfer is only used for book 3 and the returning book 1 chars in book 2 (Claude, Randolf, Gyan for example) use your book 2 stats there). For book 2, only the player char's name carries over if you picked the sequel option when starting a new game
No restart battle option for if you don't want to egress and end up overleveling (takes about 15-20 seconds to reset and reload from the main menu)
A confused enemy can attack themselves and then block the attack (lol)
No customization when leveling up or promoting (see Langrisser 2 or Seiken Densetsu)
Lose all money, healing items and rings between campaigns/books. Can lead to some grinding for money for healing rains in book 3
Can't use mithril for crafting here (nor anything else but for selling)

​
Notes:
-Some differences in GG Sword of Hajya (Root of Evil here): https://gamefaqs.gamespot.com/segacd/563491-shining-force-cd/faqs/75979, More: https://forums.shiningforcecentral.com/viewtopic.php?t=13165#p360762
-Domingo is found in battle 2 of chapter 3, near the lake on the right side (search to the left of it)
-Amigo is found in Battle 19. From where you start, go all the way right. You see a line of bushes. The third one (the one farthest right) is where Amigo is hiding. Search the bush and she joins.
-Fusion RAM Cart tutorial: https://www.youtube.com/watch?v=oVnDCf2XSvg
-*It's still possible to gain +1 to a random stat when leveling up further but it's relatively rare
​