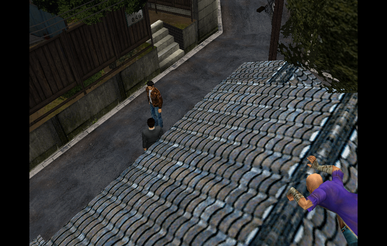 ​
+
Very high degree of interaction (especially for a 3D game of the time; can examine pretty any drawer/wardrobe/painting in certain buildings, can pick up and rotate+zoom a bunch of objects, can turn the lights on and off in many rooms, etc.)
Very authentic 1980s Japan (Yokosuka) setting
Impressive animation and detail level
Manual camera movement (analog stick looking+d-pad movement controls)
Journal feature (doesn't record all notes and letters you find though)
Day/night cycle with automatic sleeping at Ryo's house, some fast travel options, can choose which combat move type and/or specific move to train and become better at, can map one combat move (button combo) to the R button, can move around in TP or FP view, quicksave/temporary save feature, can skip most dialogue on a per sentence basis (there's an option to make each line text only at first press), can run, great draw distance and frame rate, drive motorcycles and forklifts (you drive the latter by taking on a part-time job in the game), fully voiced characters? (Loom?), you can play Hang-On and Space Harrier as well as a few other mini-games in the arcade hall within the game (can also play pool at the jazz bar), combat moves list in-game, some good humour (at the capsule: "I should try again", "don't stray from yourself" guy, the tattoo artist, ), pretty nice weather and lighting effects, option to have the game reflect the actual weather of the setting as time goes on, dialogue during combat, some interesting storytelling techniques (flashbacks, dream sequences), some memorable characters (Guizhang Chen, ), fairly large combat moves list, help raise a kitten, fight alongside an NPC at one point,
seasonal weather changes?

+/-
Some unintentionally funny scenes/animations/situations ("Wanna wrestle?" - two kids in the first area ask this, certain voice actors like the schoolgirls and the Nagai industries guard, )
Some QTE combat (works like FMV action games)
Looking around by holding B and using the d-pad is faster and more flexible than using the stick
Can't make your own notes in the journal
Automatic sleep between 11.30 pm-8.30 am (you end up at your house) - time passes very quickly
Can't break/walk into houses, 137 day time limit (34h15m in real time; if you fail you get the bad ending), a dialogue "thread" will often reset if you go back and ask a person about the same topic the next day (breaks immersion), can't buy or eat most food (no hunger mechanic), one stealth segment (a bit tedious though), can choose to join a gang at one point but it doesn't affect the story?

-
No map item (there are some posted maps you can find in-game but they're a bit cluttered and don't always point out important things)
Odd priorities and some inconsistencies when it comes to the interaction (pointless to let the player lift and look behind every painting/scroll on walls for example; various objects can't be examined for no apparent reason)
Various control/interface issues (can't choose to simply skip ahead until a certain time, it would've been better if the game highlighted all interactive objects when near them/zooming in on them instead of just doors, using phones is really tedious (should've let you pick a number and have Ryo dial it for you or at let you have the number showing while dialing it yourself), crouching while zooming in on something is pretty clunky, inconsistent looking controls when holding R and examining things at a surface level - makes it fairly easy to miss certain objects because you rule them out when the game doesn't let you zoom in on it from a certain angle, small unskippable cutscenes for various mundane actions like flicking a light switch, can't walk backwards nor sidestep except for in combat, no explanation from Ryo on most items you're looking at makes examining items that you can't take with you much less interesting, can't run in some staircases, can only buy one item at a time in the tomato shop, Ryo stops running right before transition to the next area) Unskippable cutscenes
So-so english voice acting (no option for japanese voices with english text)
Some objects in drawers etc. are just real life photos, annoying menu sfx (sharp beep), some invisible walls (can't cross main/trafficked streets) and you can't move certain lighter objects around to get past them nor climb smaller obstacles, almost no interactive dialogue (can't ask Fuku-San about what's behind the paintings/scrolls in the dojo (before finding the key to open the sword and finding Charlie and then master Chen), can't ask where Sumiya-San is, what street certain shops are on, etc. - this all slows you down considerably), some posters become blurry when examined and the text on them isn't translated, can't wait around for the antique shop owner before an event trigger at the dojo a few days into the game (he doesn't show up despite his granddaughter saying he will), sometimes so-so draw distance for certain NPCs, you only get one try at the Chai fight in the arcade and it's a pretty big difficulty spike (winning also doesn't affect the story much),


Bugs:
-Occasional saving issues ("This memory card has not been formatted") in NullDC