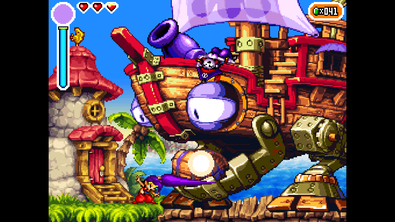 ​
​
​+
Large artwork shown during story dialogue/in-game cutscenes (no dialogue however)
Added Back dash move
Warp between warp squid pedestals
Item drop magnet and MP regen (have to buy them but they're not that expensive)
Basic 2.5D element (jump into the background or foreground layer at times - similar to VB Wario Land or Sonic CD except here there are more layers to the world) - sadly this is abandoned after the first couple of areas
Can set some enemies on fire (damaging them over time)
MP-based sub weapons here
Decent map system (shows your location, the layers, warp points and towns+save points+houses and dungeon entrances (not cave entrances however); doesn't show rock golem barriers nor any topology within rooms, doesn't show where you have or haven't been, doesn't show where the jump pads are, also doesn't name sub areas or let you check the names of warp points, doesn't show the large purple boulders)
Transforming is a bit faster here due to simplified dance move codes to switch forms (this does remove the rhythm element though and there's no rhythm mini-game here either)
Some shortcuts
A few new enemies appearing when backtracking in dungeons - there should've been more of this though or at least more paths to take with your new forms when going back for animal form move upgrades and other items
Full control config
Some good bosses (multiple patterns, )
Main attack speed and strength upgrades (only one of each though)+upgradeable sub weapons
Meet the first boss as an NPC before fighting it (give it a meal to make it allow you into its dungeon)
A few decent puzzles (using sub weapons to trigger timed switches in one cave, using a cloud sub weapon to enter the mermaid dungeon, elephant dash to get past a turret in the mermaid dungeon)
Nice art direction overall (very detailed backgrounds by henk nieborg), Very good animation
Good swimming controls and swimming is pretty fast
Four different endings based on progression and time taken

+/-
Very linear structure (set dungeon order, some sub areas are straightforward horizontally scrolling levels with a teleporter near the end, some areas are a bit less linear and dungeons tend to be more maze-like, one timed gauntlet-style dungeon where you can find clocks to increase the timer - can also revisit this part as a mini-game but it plays exactly the same, mermaid dungeon is partially non-linear - hit a statue to change where the door takes you, can get the animal move upgrades and coffee ingredients in either order)
Pretty frequent save points via elders placed here and there (similar to MW4) and no lives system here
Minor collectathon element (3 latté ingredients, 3 baby squids in the end-game)
Can only cancel a backwards dash by jumping
Can't turn around while attacking
No VA
Funny idle animation
Run by default (hold attack to walk)
Contact damage
Off-screen enemy respawning (generally good?)
Various death pits however you only lose half a heart from falling into them here
Sexualized female characters
Somewhat easier but also stiffer climbing in monkey form (some delay before you slide down and you don't let go by pressing away from a wall)
Some fetch quests
You can carry so many HP and MP potions that you can basically tank any enemy or boss
Auto-transform back to normal when moving between rooms (seems pointless)
No knockback when hitting enemies
Can farm HP and MP in caves
The monkey bullet air dash ability is basically a simpler version of horizontal shinesparking from Super Metroid
No neutral creatures besides NPCs and the seagulls in a few spots
Underwater shoot 'em up segment (sadly it's too easy, simplistic and drawn out)
Story kinda rips off Aladdin towards the end

-
Some control/interface issues (no dungeon or cave area maps, no mini-map, can't place map markers - various points of interest aren't shown, sometimes vague item descriptions and the text displays slowly, unskippable get item jingles, the 2.5D jump pads in town are one way only which makes travel a bit more cumbersome than it needs to be - also can't see the destination at times, no names shown when talking to important NPCs, regardless of how you exit a screen you'll enter on the ground and walking on the other side, if you shoot an enemy right at the edge of the screen then it isn't hit, shops and save houses in towns aren't properly marked either with signs or on the map, sometimes can't tell if the end of a location is a wall or an exit without checking the map, can't look down/up, menus don't wrap around, can't attack while climbing a chain as Shantae, no auto-fire during the shoot 'em up segment)
Some tedious aspects (can't teleport back to the beginning of a dungeon - leads to some backtracking later on, some points of no return in dungeons and some other areas which can lead to backtracking if you want to get everything (also weird how you get the elephant form after getting to the other side of a block in the desert area for example), can't even use a potion in animal form, some dead ends with nothing in particular in them and some teleporters could've been placed more centrally)
Kind of rare HP and MP drops from enemies
Some trial & error (proceeding at one point in the mermaid dungeon (after you have all four keys from the eye block segment you're supposed to unlock a fifth room by setting one eye right and one left outside the gated door (and then you also have to make note of a four statue pattern and find the right path to a sixth room!) - no clue to this and leads to some backtracking if you went back to the door with the skull above it instead), when revisiting the timed dungeon/gauntlet you don't get the chest content at the end if you grab the seal first, can still use a potion even if at full health - wastes it, some leaps of faith and cheap enemy placements - an instant downwards attack could've helped here, some shots from off screen, stomping as the elephant also destroys blocks above you if they're in the same room)
The visuals only cover about 75% of the screen at default res (dialogue artwork is also cut off horizontally at the edges while vertically it reaches further than the in-game screen; game was originally for DS)
Keep finding items you already have a full stock of (such as hearts when at full HP)
Can't ask the old guy/uncle mimic where to go next and can't ask NPCs questions manually (funny how Sky/bird girl in the first town tells you to talk to her or the two other people you know for help when they don't really help besides the young guy/Bolo telling you to visit someone to the east but not why or how to get past the rock golem)
Some ludonarratively dissonant story techniques (get hit by an attack you could've easily dodge in gameplay near the beginning, fake dialogue choices) and the story is pretty generic overall
Minor grammatical errors
No proper boss in the timed dungeon/gauntlet area
Small world with only 2 proper dungeons (final segment before the last boss is also rather short, was originally supposed to have 6 towns and 6 dungeons on GBA)
No flight transformation here
No quest log/journal feature
No alternate hair attacks or attack combos
The elephant's smashing ability feels a bit underdeveloped - mostly used like a key in obvious spots
Kind of easy and simple second boss (two patterns only)
Final boss music keeps going after it's over
Don't get to fight risky herself besides in her ship (and this fight is mostly the same as your first encounter) and she just escapes after you beat the evil clone genie
Somewhat few enemies that make you use the back dash

​
Notes:
-Original version is from 2010
-Director's Cut: HD portrait artwork, different warp system (a squid can now warp you to any other squid you've activated instead of just the one it's paired with - much better), has the difficulty of the DSiWare version and you have to unlock the magic mode costume (it was also redesigned visually; half HP but lower MP costs)+you can't switch it out at the import room in town
-Got 29/34 secret items and beat it in about 6h