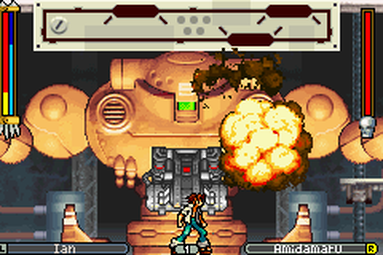 
*Most of the final area

+
Features a shop which can be accessed via the hub map (can sell items (but only the ones you can buy so it's fairly limited), not a lot to buy though)
3 hit attack combo (can't perform it while crouching, can follow it up with 1+ special attacks, can chain the lunge move into it but there's some delay between them)
Igavania-style gameplay/controls/art style w/ a hub map returns (new paths open up as you reach new locations on the map and like in Cocoron or Clash at Demonhead (NES) you have to move between locations in-game and the direction you enter a path from on the map affects which side of it you start at - can exit any level/path from where you entered it, ability gating, special item/spirit inventory that affects your alternate/special attacks and abilities (similar to the soul system in CV: Aria of Sorrow) - can add up to 20 of them to one of 4 sets/decks of 5 (slots 1 and 4-5 per set are no longer reserved for passive abilities/armor; each set works like a quick select menu for the ability/buff items and you switch by using the select button), good mid-air control, dash dodge, some hidden items)
Adds fast travel via teleporters/dobie gates - teleport between visited ones. Footballer/dash attack special attack also lets you backtrack through areas with weaker enemies quicker (a weaker version of ultra cavalry charge however (late game move) and it only really works in the early game). There's also a spirit item for teleporting back to the first location though you get it pretty late
Some new combat moves (lunge/jump attack - can hit twice and you generally have a small window where you can hit the enemy again (a few enemies are also knocked back), somersault attack, ranged amidamaru special attack upgrade (forward+l or r, however when shooting you lose the overhead swing effect so you don't hit enemies above you and you can't aim the shot upwards+it doesn't scale well in the late game), uppercut slash - can't follow it up with a sword combo or juggle enemies though)
Get the forward dash+dash jump ability sooner (Mic spirit)
Enemies carrying special items/souls always drop them after one kill
Very good bosses overall (pretty varied patterns, sometimes a minor puzzle element, three chase segments, battle on top of a moving giant robot)
Shows bosses' health bars
Some interesting abilities (wall jump/triangle jump w/ upgraded lee pai long, cloe/pendulum returns - basically a grappling hook, small sheep transformation - moves quickly and reaches into smaller spaces but can't attack and doesn't last that long (also not used much at all in this game for some reason), health draining whip returns - too slow though and doesn't always work, homing shot - kinda weak though and sometimes targets an enemy on the other side of a wall which it then can't go through, a couple of mascots/familiars though they're not very useful, huge beam attack (totem cannon) though it's not very practical and two huge sword attacks, mid-air block/platform creation - optional)
Can upgrade your health bar by finding bead items (4 required per increase; one special item also upgrades it while equipped)+your MP/SP bar by beating bosses+your number of slots per special item set by finding gear - up to 5 (no exp point leveling system however). Some movement speed upgrade spirits along with other stat buff ones
Difficulty options (easy-expert/very hard)
Good art direction and nice sprite animation, Some huge and multi-jointed sprites
Less floaty movement unless taking a couple of steps and letting go of the d-pad (was hard to make small and precise movements on small platforms in the prequel)
Can increase the number of sets to 7+ here as well as turn off ones you're not using in the menu
Improved level design variety overall (starts off kinda basic with an overreliance on corridor-like paths like the prequel)
Boss rush mode (at the first location; time attack - the rewards are just some artwork though, can refight some bosses from the prequel here too)
Regenerating MP/special move energy (can also upgrade the speed of it by using up one special item slot)
Some minor shortcuts when backtracking through paths (not enough of them though)
Gain a dragon for fast travel about halfway through the game here too (2-3h; a bit annoying how you have to use it for every path between two locations though)
Good economy in that being careful with your money stays relevant throughout unless you take it slow and use Mash (or play really well)
Mandatory gates are often placed at the beginning of paths so that you can quickly backtrack to the map when running into them (there might still be a few paths to backtrack through leading up to that area though and there are exceptions such as a high wall in the NE totem area)
New game plus (cleared levels+items+spirits etc. will be the same as before fighting the final boss)
Some decent switch and box puzzles (red temple, factory) - at times it would've been good if the game showed exactly what pulling a switch accomplished though
Gain the fire spirit (lets you gain some HP by killing enemies here) before beating the game here
Three smart bomb style special attacks (mash - random result between attack or heal though, orona - freezes most enemies for a few seconds (actually hits further than the screen) but becomes less effective in the late game, matanune/huge sword - expensive though). Also the totem cannon sort of - costs all MP bars though

​
Notes:
-Got 75 spirits, beat it on Normal, didn't beat all optional bosses