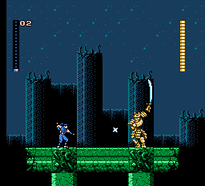 
+ Mini-bosses, 2-player co-op, fast paced overall (in co-op or when fully upgraded), good variation, 5 directional attack (the hook), cling to ceilings (and climb up platforms from below - see Ninja Gaiden 3/Ninja Gaiden SMS), good bosses overall (except for the bird), some large sprites, some voice samples (muffled), some cool weapons (homing shuriken, travelling bomb), upgrade weapons (three tiers, pick the sword up over and over), decent intro and ending

+/- Cumbersome smart bomb (costs half your life and takes ~5 seconds to activate), upgrading the sword also affects the shuriken, you jump longer/faster if you attack (can throw off your timing but is also useful in some platforming segments), borrows heavily from other action games of the time (Shinobi, Castlevania, Ninja Gaiden), you get some lives in co-op but not in 1-player mode?, limited continues (5)

- Scrolling issues (character moves closer to screen when moving left, both players can move too close to the edge of the screen in co-op), the sword is sometimes overpowered (at level 3 you get some safe spots against enemies if you move carefully – however you’ll lose upgrade levels after taking enough damage), can’t switch back from unwanted weapons (no inventory), sometimes sloppy hit detection (running man boss, turrets, don’t stand too close to enemies or power up boxes or you'll miss, bird guy’s laser and the crab robots shots sometimes go right through you), no difficulty options or sound test, very little jump height control, an attack gets cancelled if you land from a jump before it finishes, some slowdown (more in co-op), some enemies take forever to kill (purple guards, some of the blocking robots, somersaulting robots when you’re not upgraded), trial & error (traps shooting from off screen, bosses that dive into you instantly without warning), can’t save up on shurikens for later use, a bit short (5 levels)