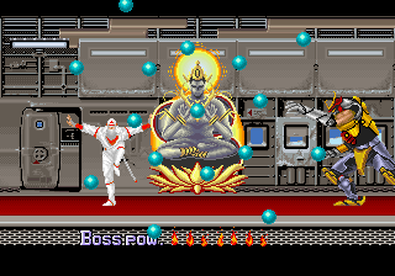 
+ Some mid-air jump control, dog companion (can stun enemies, turns into a puppy if hit but can be restored by collecting a bomb), smart bombs (magic attacks, one per sub level and you can't gain more of them), double plane gameplay, context sensitive melee attack, shuriken upgrade (only one level but it goes through most enemy defenses), pretty good magic attack cutscenes (altered beast-style), decent intro cutscene (except for the digitized look on the dog), difficulty options (4 levels, starting lives, coin worth, timer (3 levels)), enemies don't hurt simply by touching (unless you walk into a knife or sword), some decent bosses (level 1 and 3, level 4 first form),

+/- Slower projectiles than in Shinobi, checkpoints (start of sub levels), one hit deaths (no shields or upgrades), time limit, the camera isn't centered on musashi (looser scrolling to the left - usually good but there are plenty of attacks from behind or situations where you'll move in that direction), can walk on water in level 2-3, very similar bonus levels (unlike in the MD game), no auto-fire, no block or dodge moves, can't move while attacking, enemies respawn if you backtrack in a level,

- Weapon power resets after each sub level (annoying since you get it late in each one and can't get one for bosses), loose vertical scrolling, some control issues (except for the delay when turning around in mid-air, no jump height control (can do a high jump but only when jumping to a platform above you and you can't attack when doing it), can't melee attack enemies standing on a platform slightly below you, no control over the dog's behavior? unlike on MD, can't shoot while falling off a platform, lose nearly all mid-air control if you shoot in mid-air or at the same time as you're jumping), forced collecting in each sub level (unlike on MD?; collecting 3 or 4 bombs lets you upgrade your shuriken though), mostly bland backgrounds and color use, most enemies act the same as in Shinobi, kinda scratchy samples overall, no drum samples for the music, no alternate weapons (see Shinobi on ARC & SMS), only visual differences between the magic attacks and no other magic (such as the flight or higher jumps in Shinobi), trial & error (ambush attacks, boss patterns, can't jump down through some platforms in level 3 that you should be able to jump through), annoying music in level 3-3, shorter than the MD game (4 levels - 3 sub levels each though), tedious second phase for the final boss,
​