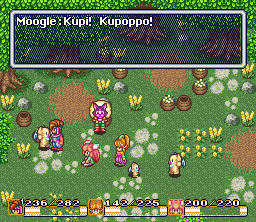 
​
+
Flammie (fly around a mode 7 world map)
Hidden paths
Minor puzzles (pre-Mana fortress)
Recovery after each boss (not MP unfortunately)
Some cool spells (morph enemy, moon sabre, drain MP/HP)
Four save slots (set save points)
Some nice in-game cutscenes (finding the tree)
If you missed some weapon orbs they will drop in the Mana fortress (except for the swords for some reason)
Some memorable locations (mushroom village, Mana tree area, misty forest, grand palace)
3-player co-op
Mixes sci-fi and fantasy quite successfully, some goofy and memorable characters, easy to understand interface, tactical battle system, gain new attacks with each weapon by using it repeatedly (FF2, Ultima), Magic rope lets you exit dungeons, shortcuts are opened after beating dungeons, some intense boss battles, you can run from the get go (limited by a stamina meter and you can't steer), fairly original and engaging opening story (though it doesn't make sense that Jema leaves right away), you can break away from the beaten path somewhat (but not away from your allies), doesn't take itself too seriously, the cannon travel agency, somewhat comical

+/-
Only Sprite can regain MP via a spell
Enemies have rather exaggerated affinities to elements (not much need for grinding spells, makes some bosses a cakewalk when you know what to use)
You can skip quite a few regular enemies as long as you keep your gear up to date
Respawning enemies
Limited inventory (only 4 of each item - limited revive items is the only major annoyance)

-
Sloppy hit detection (enemies will hit without your sprites even touching at times, evade skill seems to have more impact than your ability to target properly)
Some undodgeable enemy attacks with no invincibility time on the characters (if you get cornered you can lose control completely and die)
Mostly poor AI for allies (hard to get a good flow going, allies get themselves killed easily, very poor pathfinding)
Loose scrolling (you'll often end up too close to the edge of the screen)
The spell exploit bug (cast spells over and over with no cooldown until the enemy is dead, they always hit - more effective later on in the game)
Enemies can spam spells without you being able to do anything about it because of the overly long knockback time
bugs (characters can get stuck in mid-air, status messages show the wrong info, hits don't register or are delayed several seconds) "Some force is holding us back!" (us?)
Slowdown
Can't change direction while running
You have to talk to a certain person twice to continue the game at Pandora
Dated shop interface (can only buy one item at a time, item functions not explained, slow response time), very straightforward dungeons with overly large rooms and an overall lack of secrets or puzzles, some tedious enemies not worth fighting (slime balls, spawning eyes, upperland enemies, upgraded werewolves, ghosts), choppy movement on stairs, can't access allies' spell menus while main character is pinned down without switching leader character, when flying Flammie for the first time with Truffle he's already at the destination you're going to (Matango), dead ends and dead space, palette swapped bosses and enemies (even in the final dungeon), gold city doesn't react to you freeing Lumina (a spirit forced to make gold), needing to climb the sage's mountain five (!) times to progress, odd scene when meeting the Emperor in grand palace (he's standing in front of the seed and you can't interact ("The emperor! But he's.. What the?", then the dialogue with Fanha goes: "Did YOU beat the Emperor?" - "I'm afraid so! We'd rule the world if we had the Mana Fortress"- apparently meaning he and Thanatos betrayed the emperor and that the standing sprite in front of the seed was dead), big leap in difficulty at the mana tree area (huge dungeon/boss rush with no MP recovery or shops - need to find the somewhat hidden shop (best equipment) nearby the grand palace or grind like hell), obvious plot twist at the Mana tree (why didn't they just land nearby it?), buggy Dragon boss AI (safe spot vs. red dragon), bug makes the weapon charge reset if you move close to a southern exit during a boss fight, hard to multitask in single player - can't keep charging while making your allies cast spells, your spells are easily canceled out (casting while char is pinned down, attacking or being hit by a spell), bug makes your allies target each other with spells, some annoying music (boss music), style over function world map (why have the overview map in '3D', on a separate screen, and without locations pointed out properly? It also rotates depending on which direction Flammie faces), somewhat dull final boss (easy, repetitive, no use for Sprite), petrification (sometimes instant death) and chest death traps (random?) are both undodgeable, some backtracking (for example when you discover that you need the axe, and when going to the thieves' base), somewhat uneven difficulty (spiky tiger and the first wall are pretty overpowered while the jetbike knights suck), need to level grind a bit to increase spell power early on since MP is so limited, plot oddities (the witch explains your opponents' plans for no reason, villains stay and talk (or manage to magically trap you) then run away without the party reacting), story rips off Zelda and the legend of king Arthur, the desert maze (Zelda 1 style puzzle), some spells are near useless (defend, silence, thunderbolt, fireball, blaze wall, lunar boost), somewhat unfocused gameplay (poor pacing, sometimes you have no idea where to go), cliché storyline with a poor script and lack of character development (poorly translated at least), the lack of MP combined with the low Evade rate leads to some tedious combat with physically resistant and agile enemies, noticeable delay when the game is displaying any stat effects in battle (damage, miss etc.), charge meter isn't proportionate to the amount of damage caused (100% = full damage, while Anything under 100% = a much lower, fixed number - this doesn't matter much after the early game though),

no protection against snowman and engulf?