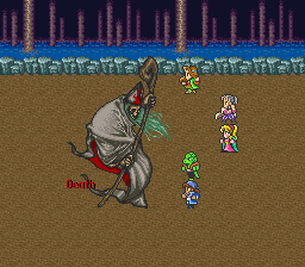 
*with 2x walking speed and some extra money codes

+ Pretty good character customization (sex, class, ancestors), some interesting mechanics (strafing (hold l/r), non-random encounters, level up by using skills - see FF2, battle formations, ), fairly open ended beginning (kick members out of the party already in the second area/first town, the alternate area to the west is pretty tough though), fairly expressive field sprites (very similar to FF4), decent intro and ending cutscenes, no weapon durability (unlike in Saga 1-2 on GB), different prologue/intro quests depending on which character you've chosen, three different ending segments/endings (good, evil, neutral), the town invasions, meaningful choices overall (to do the right or wrong thing in some quests, what quest rewards to get), stackable items, equip several weapons at once (to switch between during battle - more tactical flexibility), ditched party members can generally rejoin if you revisit them where you first picked them up, + you can kill death (or sacrifice a party member to him for a weapon), some interesting dungeon elements (monsters obeying bosses that you can do quests for won't attack you any more if you help their boss, fake stairs), some nice visual touches (foot steps in the sand, final dungeon, final boss background), pretty cool final dungeon

+/- Save anywhere (only three unnamable slots though), both sexes can't choose between all of the starting classes (the division seems arbitrary rather than based on gender norms), characters remember most actions between battles and turns but not formation movement commands, no auto-battle command, while there aren't any random encounters there are so many monster sprites in most dangerous areas that you'll be fighting a ton anyway, free resting at inns, party formations are broken if monsters attack you from the side or behind (gets tedious early on to have to rearrange an entire party just to hit the enemy), need to specialize in magic schools since some of them conflict with one another (similar to Baldur's Gate), you travel between towns/locations by selecting them on a world map instead of exploring the world like in most JRPGs, consumables need to be equipped to a specific character to be used in battle, some balance breaking (but optional) bugs, characters return to 1 HP after getting knocked out in battle (generally a good thing though you might want to not use some characters temporarily to build up levels for others who are lagging behind a bit faster), very little party banter, can't make some ditched party members rejoin you (bear and wolf), each character has their own theme (unfortunately it plays too often), static difficulty, several long fetch quests,

- Steep learning curve, unequipping a weapon makes it loses all of its levels and skills for that character (wtf!), characters default to Defend in battle after having been put to sleep (why?), trial & error (can't see your good/evil points?, mechanics like spell schools and how to build specific stats, charisma and love stats, can't level up a weapon by using its special attacks), stiff/unresponsive menus and movement, overly large areas combined with a somewhat slow walking speed (and you can't run), dated interface (Can’t switch members in all pubs, no item sorting, can't buy more than a set amount of an item at once (generally 2-4 - not shown in the shop menu, only one at a time when it comes to armor and weapons), can't see if a piece of equipment is already owned/equipped or if it's worse or better for a character in the shop menu, can't see how far you have until the next weapon level or stat gain, using items, need to press the button to select a member during battle and there's a small pause before it happens, etc.), no area maps, having to catch NPCs you want to talk to, no journal/quest log feature, grinding for money (no regular balm (healing) in the first town) and for levels on new weapons (no weapons share gained abilites (see FF2, SoM, SoE) - would've been better if weapon types shared levels/exp/abilities/ability exp at least partially), pretty rudimentary dialogue and characters don't give much reason for joining together, slow battles (can't be sped up?; pause between each member selection, slowly shows you each stat gain separately after the battle), plenty of dead ends and many dungeons lack treasure chests, non-animated monster sprites in battle, near NES quality field backgrounds, some annoying sfx (encounter sfx, some abilities), overpowered final boss and bosses in general, missable quests (harem and knight quests for example), plot oddities (can't attack the soldiers guarding the front gate of lord harun's fort (even after getting inside it through the back door), can't ask lady flamme about the locked chest in her tower, no one in Aurefront reacts to you saving them from the monsters and the treasure suddenly gets locked afterwards - everyone there also says the exact same thing afterwards except for one person, can't talk about anything with the lord of Mirsaburg or his daughter when you first get there), some empty choices (leaving the sewer thieves alone), some party members will suddenly leave and take equipment with them, annoying how you walk into NPCs to talk to them since you'll easily initiate dialogue when you don't want to, some NPCs can't be talked to for no apparent reason (gives an unfinished feel to the game), sea travel is expensive (more so with a larger party - more of an annoyance early on though), many bugs (some serious like the enemy becoming invincible so you have to escape the battle or healing spells being weaker when a stat is around 51, etc. - all are at least fixable), Sylvan (the wolf) sucks, poor gear progression (for example regular spears are found long after good ones in Claudia's scenario) and you need to memorize which towns sell what because of the limited shop inventories, unfitting music in the dinosaur area, odd quest triggers for the lizardman slaves quest (need to talk to the pub owner despite having heard the sounds behind the weapon store), can't revive characters during battle?, barely any exp or gold rewards from bosses, can't teleport out of dungeons, can't defeat the Jelton monster invasion by killing death and the fire tyrant?, need to memorize several shop locations due to limited stocks

Bugs:
-The raincloud armlet fetch quest isn’t finishable as Claudia? (the black dragon can’t be interacted with)
-Can't buy from the item shops during the "shop owner's father's murder" quest in Melvir due to the quest dialogues repeating over and over
-Falcon strike/immobility sword cancel: selecting and then canceling this move gives any move then used by the character speed priority in that turn
-Unlimited use: After casting phantom warrior or similacrum spells, using consumable items will not cause the actual consumable item's counter to decrease.
More: http://www.gamefaqs.com/boards/588632-romancing-sa-ga/67320055

Notes:
Mechanics and tricks: http://www.gamefaqs.com/boards/588632-romancing-sa-ga/67320055
-The raincloud armlet fetch quest was bugged in the 1.0 English patch but has since been fixed
-[Charisma] determines the success rate of the King's Sword, [Love] reduces the charm effect when hit by Weakness
-Once you have 9999 gold, sell an item at a shop. This gives you a 'jewel'. A jewel is worth 10000 gold, but more importantly it allows you to gain gold again. If you have 9999 gold, and you do not convert it by selling an item at a shop, you will earn no money from battles.
-WSC port's new quests: http://www.gamefaqs.com/boards/578836-romancing-saga/51303593