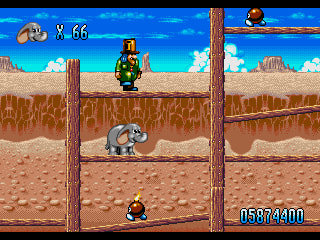 ​+
Switch between 4 different chars (can rescue and have up to 3 chars follow you at a time in each level - these have different abilities that let you reach new parts of a level (Rabbits jump higher, Squirrels climb walls, Beavers can swim on water surfaces and bring back rafts to let the others pass, hedgehog kids can traverse narrow paths, etc.; can also pick up items that add an ability or transform Rolo himself: mini form, inflated form - flight, sucking ability to carry and place/throw items - can also carry them between rooms but if you leave the room you put a carried item in it's moved back to where you found it (Citadel?))
Can open up bonus areas on the hub map by finding hidden map pieces in the levels
Can replay beaten levels (the other animals will be uncaged but not in your party, 1-ups and point items respawn, can't replay mini-game levels), can exit any level at any time by pausing and pressing start while selecting the map icon
One alternate ending (100% rescued; oddly harsh ending if you don't get 100% - "you are never truly happy again")
Fast paced overall
Borrows some SMW elements (some levels have 1-2 alternate exits, hub map with a large world, inflated Rolo flight), can ready your next jump while in mid-air by pressing and holding down the jump button, many hidden items, decent mini-games (catch presents as they fall faster and wider), decent animation and art direction overall (good use of color for some backgrounds), minor puzzle solving (using placeable springs or inflation to reach new places, hitting blocks with certain items to move them and open new paths), minecart segments (trial & error heavy though), one decent (second boss) and one boss (final boss)

+/-
One hit kills and Rolo dies from water - If you are carrying the other animals then they act as extra hit points when touching enemies and other hazards but not when falling into water
or spikes?
Saved chars don't carry over to the next level and neither do items (have to find a vacuum cleaner to give Rolo the ability to suck),
Collectathon/Rescue mission (have to rescue every animal in a level to open the exit, some levels have none though)
Can have the other animals get carried by or follow Rolo (the elephant) but not the other way around - Carrying is sometimes needed to avoid them dying to water
Can't manually stand on Rolo or other rescued animals to reach higher
If you pick more than a third char up then they'll replace the previous ones (they'll leave the level, the game sometimes prioritizes variety so that if you pick up two beavers when you have for example a rabbit and a mole it'll keep the rabbit and mole - sometimes it doesn't though which can be annoying), pressing start on the map screen lets you control the bird and have a look around (similar to SMW however you still have to explore the map on foot first to be able to see anything so it's kinda meh), somewhat unforgiving hit detection near platform edges when jumping onto them (can fully connect with your front feet and still fall through them), pretty easy to rack up extra lives, in one level you can reunite a hedgehog mom with her kid - pointless but cute, the game feels like it was supposed to be based on Dumbo (Rolo, the evil circus people theme), James Pond 3 cameo in one level (before it was released oddly enough), can't switch between rescued animals directly - have to switch to Rolo first, no control over how far or high you throw the "spring nuts", can't deflate after inflating Rolo (auto-deflates after exiting the level), some momentum is lost when jumping (takes some getting used to), mostly short levels, the dryer/tumbler shrinks Rolo into mini form - seems a bit redundant when the hedgehog kids are used for the same thing, the helmet item makes you invulnerable for the rest of the level - OP,

-
No checkpoints (you always respawn at the beginning of the current level)
Lose rescued animals+the key and vacuum cleaner if you die as Rolo in a level and if you hadn't rescued all animals yet then you have to do it again or the exit won't open
The "fox trap" enemies - have to jump at exactly the right angle or they'll jump into you and they can't be killed,
If Rolo moves too far away from it then the animal you've rescued and left around will disappear (same thing if you move to another room as another animal and then switch to Rolo via the menu) - forces you to restart the level unless you had rescued everyone and thus opened the exit
Some control issues (bad hit detection on the window panes, overly tight camera when jumping - can kill you in certain platforming over pits/water heavy levels, twitchy scrolling when running and changing directions (and if you change direction and stand still the camera won't adjust until you move for a bit), overly fast falling and movement in slopes for a game where one hit kills you, vertical flight while inflated is too slow, digging through walls is too slow - you also never use the mechanic in a particularly interesting way, no jump height control as the rabbit, pretty floaty movement while running - move several steps' length after letting go of the d-pad and a couple if you change direction and hold the d-pad down (if you let go after turning you'll stop on a dime though), can't shoot water while tiny but can still pick up water glass items, can't squeeze into a narrow horizontal path while falling - have to do this or time your flight right with the elephant to get a hedgehog kid into one and find a bonus level puzzle piece, weird how you have to jump next to or in front of doors in some village levels to enter them rather than just pressing up/down)
No save or password save, some trial & error (the truck boss - have to memorize the pattern so that you have a shot to bounce on when it tries to ram you, leaps of faith - can't look down/up, minecart segments - too fast and the background is somewhat distracting in the first one, can't see on the hub map if you've found all exits or hub map puzzle pieces (for extra paths on the map screen) in a level, some mechanics aren't explained in-game, the "follow the box with your eyes" mini-game since you can't actually follow any of them properly, some one way teleporters which aren't marked as such - end of the minecart segment)
No difficulty options, some levels seem kind of unfinished (in the first area there's a level with a moving platform that just ends up moving in circles, in the first desert level there's no point to finding the vacuum cleaner?, in one village level there's no point to the three Rolo items, one small path in a prairie area level just leads into spikes, etc.), some tedious parts (the levels with tiny and slippery platforms in the desert area, slow moving platforms in various levels, some segments where if you fall down you have to restart the level or redo a longer segment within one, ), no level maps (most are pretty small though), point items are literally just numbers floating in mid-air, no way to increase your HP, some levels are super short and easy, various levels have no animals to rescue or abilities/items to use and in others where you do rescue a bunch animals none of them are used to explore with, can't skip the logos on boot up (can do it in other EA games), pretty basic sounding music (sometimes annoying), mostly simple bosses (short single patterns), odd difficulty curve in that it doesn't really ramp up in the last levels,