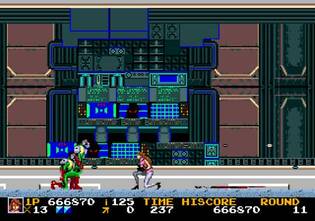 +/- Ammo based weapons (you really need to conserve ammo later on), one hit kills later on, sometimes enemies jump off cliffs and the knockback on them is off at times (shoot an enemy from behind and it falls towards you), can't shoot while moving or jumping