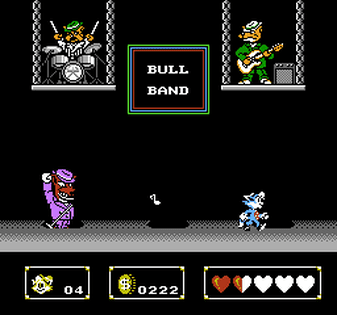 +/- Recoil from hitting walls and objects from either direction and enemies from above (inconsistent when it comes to enemies but probably for the better; still a bit annoying to bounce back from walls and objects when you don't want to), the circus level is a bit longer than the previous ones, no level timers, most 1-ups in the levels are easy to get to, bought items never go away, the scenario of each channel/level is that your GF gets kidnapped, big lifebar (10 hits), there's a grab and throw items mechanic (hold punch) but it's only used for a mini-game, unlimited continues?

- Plenty of slowdown, some control issues (some upwards attack delay right after landing from a jump, annoyingly tricky to grab platforms), some bosses take too many hits to kill considering their patterns, trial & error (hard to tell if you're damaging the main circus boss, some levels have really fast flying enemies, precise swing jumping required at times while its controls are rather stiff), too much flat corridor style level design (some segments scroll vertically but no levels scroll in both directions at the same time), can despawn some enemies and items (the bats in the circus themed level, a 1-up), some sub level transitions and level backgrounds have an amateurish look to them, a bit drawn out towards the end (last level repeats all bosses and mini-bosses), no difficulty options, very short music tracks overall,