RoboCop Versus The Terminator (MD, 1994) 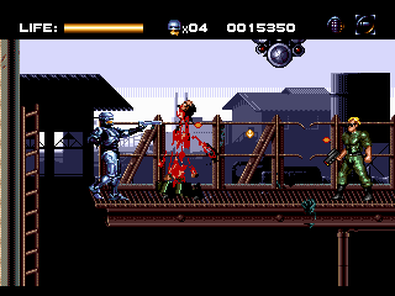 
​
​+ Some interesting weapons ("grenade" launcher with controllable projectiles, semi-homing missiles), weapon inventory (only 2 though - next weapon picked up replaces the current weapon), respawn on the spot (lose only the current weapon - this sometimes leads to very long boss fights though since you don't receive more weapons during them and they tend to have a lot of HP), some hidden items, temporary invincibility power up, some decent bosses (level 4 and 5 - multiple phases for the latter), fast ladder and zipline/railing climbing, good art direction, good voice samples, optional objectives in some levels (hostage rescue - restores HP, search and destroy cameras in level 3 - 1-up), difficulty options (easy-hard), one or more hidden levels, partially destructible environment (nothing big though), context sensitive melee attack,

+/- Some respawning enemies, mostly maze levels after the first two levels, unlimited ammo for every weapon, the grenade launcher is a bit OP and you can't control the projectiles while standing still (could've been used for puzzles - see Metal Gear Solid or Link's Awakening's tile filling puzzles), partial control options (can't edit the weapon select button mapping?), can't move while crouching, can't run, 8-way aiming but you can't shoot straight down unless you're hanging from a railing or climbing a ladder, can farm 1-ups at the beginning of level 4 (go to the left and destroy the turret dropping a 1-up then enter and exit the hidden level), the spread shot can destroy certain projectiles (not that reliably though), gore

- Have to move backwards to dodge a lot of projectiles after a few levels (breaks flow and makes it harder to pick up some loot since if it's dropped by an enemy it quickly disappears), control issues (can't look far down enough to avoid leaps of faith, can't jump down through platforms which can be jumped up through, no invincibility time or knockback for you or the enemies, no dodge or block move - larger sprites means it's harder to dodge everything normally, can't stand still while aiming, ), many cheap enemy spawn points, unavoidable death in level 4? - two toxic barrels in a row, no weapon upgrades, so-so use of FM for the music and most sfx samples are pretty scratchy, some tedious small enemies (can't hit them by crouching and since you can't shoot shoot straight down it becomes a bit of a hassle to hit them at all), repetitive, no 2-player mode, can cheese some enemies by moving so that they're right at the edge of the screen and won't attack back, some slowdown when the grenade launcher is used, boring level 6 and 7 bosses, no boss music,