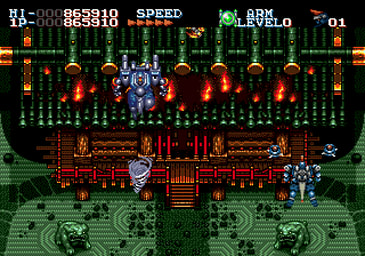 ​
+ Some cool weapons (homing attack which takes out enemy bullets, triple laser), some good bosses (most are good as long as you're not fully powered up), some nice cutscenes, difficulty options (four levels, no number of lives or credits options, no control config), good art direction (even more of a feudal japanese theme than Musha), charge attack (charge by not using your sub/special weapon - lets you shoot your gun drones in a diagonal arc (strong but doesn't hit that many enemies and there's a delay before it shoots, charges rather quickly though), multiple endings, you can block bullets with your options/gun drones+some sub weapons and destroy them with your main weapon when it's upgraded (the drones aren't fully reliable though), good length (13 levels), manually adjustable speed (8 levels), respawn on the spot (lose one level on your main weapon and all but one level on the special/sub weapon - you drop your special weapon into the level when dying making it at least a bit easier to get back on your feet), ​4 levels of upgrades for the main weapon and 3 levels for the sub/special weapon (could've been one more for the main gun considering how many power up chips you get throughout the game), alternate paths in three levels, little to no slowdown

+/- Mostly eurodisco/90s dance OST - doesn't fit the theme and somewhat more realistic visuals but it's pretty catchy and well produced (one exception is the second to final boss theme which returns to metal), alternate history/steampunk theme, can't cycle weapon power ups (they stay on screen for a bit and in a few situations are hard to avoid), small hitbox on your ship (only issue is that it's a bit harder to pick up sub weapon power ups than you'd expect), keep receiving one or two weapon upgrades after a boss dies (gives a somewhat unpolished impression), only four special weapons (6+ in Power Strike 2 and Spriggan?) and two of them are spread shot variants, touching walls won't kill you, no shield power ups, only one level of charge for the charge attack, sad ending (your lord is also evil, same on either difficulty)
​
- Difficulty spike at the blue mech boss before the final level and if you die completely (use a credit) you don't get a chance to recover before the fight, pretty lame dialogue overall (skippable but can't speed it up), no weapon inventory but sub weapon power ups are quite frequent, some trial & error (cheap hits), somewhat uneven difficulty curve (easy level 1+2+6+7 bosses (6th boss is the easiest boss in the game) with a level 3 sub weapon, the third stage is the easiest in the game, pretty easy level 5 boss), very hard to see some enemy bullets (level 4 boss (distracting background), second to last boss, some sub weapons blend in with certain bullets), simpler weapons system than in MUSHA (gun drone formations replaced by a pretty ineffective charge attack, less interesting weapons), enemies take too many hits to kill, less intense than Musha, since your options/gun drones are invincible here there's no incentive to keep collecting power ups unless you die, blue weapon is a bit overpowered, you can shoot bosses before the fight begins, somewhat bland backgrounds and color choices compared to MUSHA or Spriggan, short seventh level (lava), somewhat weak sfx overall compared to TF or MUSHA (better during the final boss fight), ​most difficulty balance problems persist on Hard (easy parts aren't much harder, hard parts are even harder),