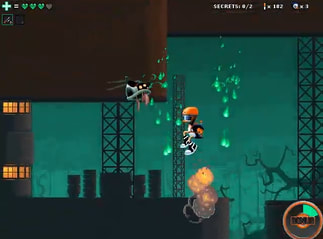 +/- Bonus levels play out in the main engine (as opposed to something different like in Sonic or Mario; pretty fun though), special weapons don't carry over to the next level, standard heart-based health system, can't play as your rescued friends, can't duck without moving, power ups don't carry over to the next level while health bar upgrades do, jetpack doesn't recharge from landing on bumpers

- Very short, minor control issues (somewhat floaty movement, less forgiving hit detection around platform edges when moving towards them at full speed than when nudging slowly towards the edge (in which case the hit detection is very forgiving), somewhat odd siding physics (try sliding against a narrow path with a breakable block over it upwards in a slope and you auto-slide down the slope, can't look down while moving or attack downwards (can create leaps of faith or break flow), some delay on jetpack activation after jumping), walk animation slows to a crawl when moving up against a wall, some trial & error (shots from off screen, boss patterns), can't immediately retry a bonus level,
spikes sometimes blend in with the background, some slowdown at times, effects when breaking blocks etc. look a bit unfinished, so-so enemy AI overall (bit of a shame when you have other means of attacking than jumping and rolling)