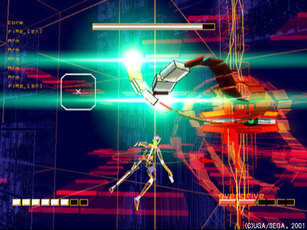 +/-
Need to get 100% analyzation on the first four levels to unlock the fifth one (meaning you need to 'unlock' the floating cube at the end of a sub stage by shooting it 8 times before it floats out of view)
You can take more damage by gaining levels (you level down once after each hit)
Large cross-hair
Unlimited continues
Different viewpoints need to be unlocked (why not have them accessible right away?)

-
Slow turning controls
Somewhat simplistic compared to some earlier rail shooters (no speed control, simpler camera angle switching than in PD, etc)
A bit short (5 (admittedly long) stages)
Non-interactive tutorial (it's more like a digital manual)
Some trial & error (need to save bombs for the absolute final boss (game hands out several unneeded blue spheres instead of red spheres there)
Some annoying instruments​, quick enemy patterns, abstract designs means you don't know how some enemies will behave, boss patterns, some attacks from behind (one of the bosses, a couple of substages - some sort of radar would've helped here)), no rhythm elements/shallow musical interaction, no checkpoints (long levels), single player only, no difficulty options