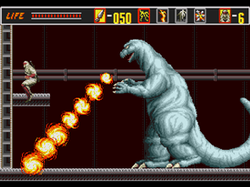 +/-
Pretty easy to fool some enemies into jumping down pits

-
​Trial & error (boss patterns, some cheap enemy placements, leaps of faith (can’t look down or up))
uneven difficulty curve (Godzilla is quite tough while the train and airplane bosses are easy)
player character (Joe) moves pretty slow for being a ninja
tricky to pull off somersaults
frustrating final level (a maze)
​Joe automatically uses his melee attack when standing above item crates or next to the metal lifts in the factory level or next to the doors in level 1 (also uses it somewhat too soon against some enemies), inconsistent knockback (a few projectiles make you fall towards them instead of away from them when hit), you can throw shurikens through small parts of some walls (hit detection bug), somewhat limited jump height control (also can't shoot immediately after hitting jump, need to wait a split second which takes some getting used to)