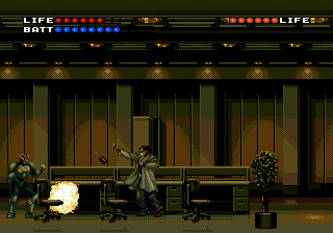 
+
Unusual premise, mixes RPG and side-scrolling beat 'em up gameplay, humorous tone throughout most of the game (and the writing is pretty good overall though some quests are pretty bland), different NPC reaction depending on if you're in or out of the suit, pretty good dialogue overall, pretty good intro cutscene, some decent puzzles (tape riddle), combo moves (jump+punch=leaping kick), some adult themes (drug dealing, kids getting shot by bank robbers (not to death though), neglectful parents), gain new attacks as you progress through the game, some surprising scenes like when the truck is driven right through a building's wall while you're inside, some cool interaction with other "rent a heroes" later on, rogue rent a hero job, fake game over near the end, good (but overly drawn out) in-game outro

+/-
Fast movement (only in the suit which runs on batteries), creating an account at the bank costs 1000 gold, very linear structure (would've been good to be able to pick between a couple of jobs at once as well as skip boring ones), random encounters start happening after a few jobs and they are tougher than the optional encounters you can have while also giving less money in reward (at least they're not very frequent however since you can't use items during battle sequences it's possible to get caught off guard and die), very limited inventory (annoying since you need to be carrying a few batteries at all times and they're very inefficient initially, more quest items should've not taken up inventory space (the five combat suits don't)), save anywhere outside of battles after completing a few jobs (RH bracelet, only three unnamable slots with little info though), jump kicks and leaping kicks are generally overpowered, same music in the first few areas (it changes after you've done a set number of jobs), you can change disguises in front of people without them noticing, new weapons replace old ones, the first two special attacks don't stun or knock enemies back long enough so they're not that useful against some enemies

-
Frequent random encounters later on, no journal/quest log feature, suit maintenance (batteries which run out pretty quickly (you want to be using the suit often since it lets you move faster) and a "monthly" rental fee (happens more than once an hour in game time and you can't check how much time you have left anywhere - once a warning message pops up you barely have enough time to make it to a bank if you're in another area and this gets old quickly (however if you make a bank deposit the fee is drawn automatically from your account once the time runs out - should've been explained by the game)), plot oddities (some NPC dialogue doesn't update properly depending on past events or what you're wearing, can't give hoo-ooligan man an extra battery, almost no help from the police against the dynamite dogs, can't put on the suit when you're about to be thrown out of the malaysian princess restaurant, can't ask the police for support when taking on the wurdy books people in Molden, one of the early jobs is a 10 million gold delivery between banks and you encounter two robbers with knives on the way (you also get a weak 1k gold reward for the trouble), not everyone reacts to you putting on the suit at home, no one in your family reacts to you starting to work for SECA, charge the attacked woman (first job) Afterwards for 400 gold), the music restarts every time you enter/exit a building or change floors, dated interface (can't make research donations directly to the lab, can't see how long until you get an upgrade from donating to armor/weapon research, can't see how much money each level of armor and weapon research costs before paying, non-stackable items, can't buy more than one of an item at once, somewhat slow text speed even on fast (two settings - slow or fast)), tedious second job (love letter - long fetch quest with a weak reward), sloppy hit detection (unforgiving, inconsistent), simplistic controls and enemy AI in the action sequences, mostly uninteractive backgrounds, bland color choices and field graphics overall, somewhat slow screen transitions (indoors to outdoors and vice versa), no area maps, tedious hidden cave segment (labyrinth, frequent random encounters, annoying music), poor directions given during the food delivery job (and it's literally a dull delivery boy quest though at least the reward is decent), the optional set encounters start giving you less money after a while (from 100 to 10 gold), can't take on new jobs using the bracelet even though you can communicate with Mieu with it, can't turn around in mid-air, some enemies take too many hits to kill considering the reward and you can't escape from battles, you can only deposit 1000 gold at a time in the banks, can't make NPCs move out of the way (they sometimes stand in front of clerk NPCs), some trial & error (stolen suits fight at molden valley station, peachinator revives once, finding the cat, finding the warehouse switch, bomb defusal, finding the plates for making fake money in the water, finding the malaysian princess restaurant, the wurdy books employee test, finding the location of the research lab (not that hard though), making a deposit lets you pay rental fees automatically until your savings run out, bank robbers, you need energy to get through the mine, figuring out combo moves), bullets do less damage than bumping into the enemies firing them, can't rest in your own bed, almost no clues about the cryptogram puzzle, two enemy types can be beaten by crouching and punching near them, same music in the demo tape as for the gas dance bit, mixes in mundane jobs and easy battles even in the late game

​
Notes:
-Research lab is in the SW cafe in the first area
-Plates are one tile above the SW corner of the SW warehouse building in Molden
-Defuse bomb by searching on its right side
-Malaysian princess restaurant is in NE Goodriver
-Take out the trash for someone on floor one near the onion apartments to find the cat
-The Archeologist's notes are in the SW corner of the second chamber from the top left in the Bigwood cave, also the pattern is right, left, down at first (to open the hidden cave), then r (red) d (blue) l (yellow) with the gems to open the inner part (you won't get your ultimate weapon until going to the final area btw)
-"empty" molden warehouse has its switch on the wall near the NW corner
-The police chief is hiding under his desk during the attack on the station
-Go to the research lab after beating peachinator
-Pick up the V6 suit before going to the dynamite dog's warehouse before the finale
-Beat up non-random Dynamite Dogs to find the manhole key (found mine in Pittsville)