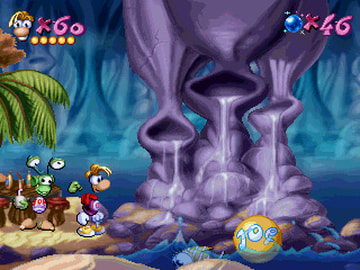 +
Some interesting/fun mechanics (clone chase, rail segment, cut ropes with your helicopter hair, air gliding (set length) and flight (Alex Kidd style, limited to two sub areas only though), chargeable boomerang punch attack, place seeds to grow plants to use as platforms (see Mickey Mania or Yoshi's Island), swinging (CVIV))
You can look upwards (except when climbing vines) but only slightly downwards
Save feature (only one slot per game though)
Great art direction and use of colour overall, expressive sprites
Bonus levels (collect blue gems within a time limit)
Control and sound options, mixes in some scrolling shooter segments (your sprite is really large here though), plenty of hidden items, some branching paths through levels, some large and detailed sprites, some uses of ambient sounds and music (doesn't always fit though), you can generally exit an area on its first screen, upgradeable lifebar (from 3 to 5 HP), artwork stills before each new "world", some good bosses (Mr. Sax, space mama), good length, run button (circle, unfortunately it takes a long time to get the run move), skippable intro cutscene, higher quality music and more sfx compared to the JAG version (it kind of sounds like Adlib was used on JAG), better intro than in the JAG version (fully animated and voiced compared to stills and text - the voice is pretty annoying though)

+/-
Gain new moves as the game goes on which can then be used to collect stuff in previous levels
Auto-grab vines and other climbable bg tiles
Somewhat corny playable character
Fairly easy to loose your forward momentum when trying to quickly turn around and jump (in bonus rounds for example)
Can't swim
Off screen enemy respawning, purple fruit boulders don't squash smaller enemies, forgiving hit detection around platform edges, hang onto ledges once you get the move (unfortunately automated like in EWJ and you can't hang onto most moving platforms (flowers, clouds)), no level timer, somewhat slow falling speed, can't punch while crouching (can get tedious in parts where there are a lot of small or ducking enemies and seems pointless for the most part when you can still hit them with the punch while it is retracting), very hard bonus levels overall, getting touched by the left screen edge in auto-scrolling segments kills you, some shots from off screen (there are clear audio cues though), final boss rips off CVIV a bit, punch reaches longer while in mid-air, great buildup to the final boss but then it's a bit of an anticlimax since you never actually fight the main bad guy (there's a Dracula-like fight where you dodge attacks and then you fight frankenstein's monster versions of previous bosses, then the game ends), missing the in-between sub area transition effects of the SAT version (most of them look pretty cheesy though), can't shoot laser shots while riding the mosquito in this version (you use the punch instead), no swiss knives or forks in the final area

-
Forced 100% electoon liberation to beat the game (not made clear in-game)
​Blind jumps (can barely move the camera downwards, sloppy upward scrolling at times)
Trial & error (scorpion boss, frying pan ride, some enemy ambushes, you lose your flight ability after the first two sub areas you use it in, the "cut the ropes" segment, dark cave, triggering some of the cages and other items can get pretty random (generally there are audio cues but finding the spot that triggers it is just a matter of luck sometimes), the second stone giant chase (need to stand at the edge of a platform with a spike bed on it in a weird way), game doesn't show how to move while crouching in the options before playing, big red robot is invincible?, some of the spike bed objects/enemies hurt from the side (makes some band land segments rather tedious), you can grab 1-ups with the punch, sometimes hard to tell if you can or can't stand on/climb a foreground object, boss patterns, rocket rides in band land)
Can't move backwards to a previous sub area in a level and can't enter a specific sub area in a beaten area from the hub world (makes freeing the purple berry people/electoons much more tedious)
Limited continues
Can't exit beaten areas at will, it feels like padding when the game gives you stuff like the punch and run mmoves after a few areas instead of at the beginning area (makes you replay sub areas to free the berry people), slow paced overall (you won't be able to run until half the game is over, mini-rayman, can' run, slow crouching and climbing, can't move while charging your punch), missing some details seen in the SAT and JAG versions, no yes/no prompt for the bonus levels (they cost ten blue gems to enter), can't access the options menu in-game, no difficutly options, sometimes sloppy hit detection (hit boxes are generally smaller than their sprites, mosquito carrying a large spike ball looks like you should be able to hit it and also like you should get hit during the boss fight, can't stand on top of the cymbal trap), slow second/mosquito's nest boss, most spike beds kill instantly even during invincibility time (there are exceptions in pencil land for example), occasionally lacking animation/feedback (bouncing spike balls and static background during the mosquito's nest boss fight, stormy band land area's background), some tedious platforming parts (horn segment, small slippery platforms segment (easier on JAG/PC), most bonus levels), hard to spot some hazards in the cave area, some jumps are harder than in the JAG and PC versions (one pixel perfect jump in the cave area, another one between pen traps later on), ~15 second pause at Eat at Joe's before he starts talking to you, slow stone pillar boss, music glitches (sometimes stop playing mid-level), it takes over a minute to boot up and start playing due to an unskippable logo and loading times, lame ending that doesn't show what happened to Mr Dark or the fairy, different and slightly worse bonus level completion graphics compared to the SAT version, there's a tiny bit of slowdown in some places with many sprites on screen at once (it's barely noticeable)

​
Notes:
-L/R to move while crouching
-Punch hits harder in mid-air? (According to a speedrunner)
-Hit select on the hub world to enter the options menu (also lets you quit so that you can reload a game save)
-No sliding in the JAG version (makes it quite a bit easier in some parts)