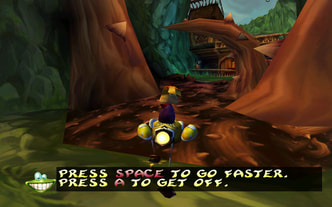 
*Some auto-scrolling segments, second phase of the final boss fight


​
​
​+
Can strafe and circle strafe (however the camera tends to focus on Rayman instead of the enemy when doing the latter)
Good variation (mixes in some auto-scrolling (waterski, rocket horse riding - loops in some segments, rollercoaster which you can rotate - a bit like a course in F-Zero X) and on foot racing segments, multiple gimmicks per level, some levels shift between more than one distinct environment, flying pirate ship chase segment in the "the precipice" level, other chase segments such as the giant spider encounter, temporary flight (gained about 3/4s into the game and only used in one level) - could've been used to reach new areas in previous levels (it even looked like there were such areas early on), etc.)
Some good bosses (the fights that test the use of your abilities), Mini-bosses
Expressive sprites and models (fairly charming made-up language during dialogue scenes however one of the NPCs speaks english instead), Very good art direction overall, very good draw distance and great textures overall+some nice lighting effects
Hover jump by default (Yoshi's Island) - also lets you float upwards in wind gusts
Some creative gimmicks (can throw explosive barrels/kegs upwards while carrying them and then grab them again as they come down - lets you attack incoming enemies while carrying them, luring enemy attacks to break certain walls and progress or luring enemies into pits, can set kegs on fire to temporarily ride them over pits in some levels, can ride plums by shooting while standing on them - moves you in the opposite direction (can also throw them at some enemies to perma-stun them+stick them onto spikes to turn them into platforms+bounce them on the ground and then jump off of them to reach higher), reverse gravity segment where you ride a rocket horse/shell on the side and upside down) and enemies ("rocket horses"/shells - have to tire them out and then you can hop on and ride them to go faster and move over spiked floors plus break certain barriers as you're jumping off them plus move up steep slopes),
Can exit new levels via their entrances (can't exit beaten levels from anywhere though - a few levels do have an additional exit around mid-way however)
Gain one permanent movement ability over the course of the game (grappling hook swinging via floating O symbols/purple lums)
Fast (non-cutscene) dialogue
Upgradeable life bar via on foot racing mini-games found in some levels and freeing lums from cages (upgrades with each 10 cages)
Gain a charge attack some ways into the game, temporary shot power upgrade (power fist, lost after dying three times), saves collecting progress in levels (but not opened door progress for the most part), in media res beginning (escape from captivity - very short segment though), the spoken "help!" from cages is used as an audio cue to help a bit in finding them, shows enemy and boss health, one alternate ending (keep the treasure when asked by Jano), ricocheting bullets (Turrican?), context sensitive sfx for walking on different surfaces (Metal Gear 2), some aim assist when shooting or throwing (can't be turned off but generally a good thing), unlock more lore as you collect lums/shards (pretty shallow and presented in text form though), minor sequence breaking opportunities using damage boosts to reach higher (more with glitches), some cool setpieces (the "the precipice"/flying pirate ship chase segment level, ), decent timing puzzles

+/-
Linear structure (basic hub map screen - there's a few sub levels (more like mini-games) but they are unlocked at the beginning of regular levels; the PS2 version replaces the map with several hub worlds but they're still linear and there are some issues with them - see notes below)
Collectathon element (50 lums/energy shards (1000 in total) and 5+ cages per level - getting all of them is optional and the requirement to progress at a few points is pretty low (not sure how low but I never needed to backtrack to collect more lums), some rescued NPCs talk with you and help you progress, need 100% in a level to reach its bonus level though this is completely optional)
Long levels overall and they usually feature some optional detours for items
Can only save in-between levels but there are fairly frequent checkpoints within them and you also have infinite lives (sadly the photographer was replaced by a green lum/shard which isn't as visually interesting, can switch slots by pressing Esc when prompted to save, you only lose a bit of health from falling into pits or moving into other lethal hazards - then get sent to the previous checkpoint reached; in the later PS2 version you can save at the beginning of each sub area of a level)
Can (sort of) wall jump/shimmy upwards but only in tight spaces and there's no finesse to it - not as interesting as in Mario 64 for example
Limited oxygen underwater - pick up blue lums to restore it
Can only look around in FP view while standing still (0 on the keypad) - this does work (usually) when normal rotation doesn't though
Some quest-driven progression (have to learn the name of a sub area within a level from a later level to enter it and get an item for an NPC who then helps you progress, no magic seed (grow plants) ability - this is handled by Globox instead which is a temporary helper)
Some of the music is pretty cheesy
Pretty easy combat
Borrows the slide segments from Mario 64, basic switch puzzles, no melee attack here (Rayman 1), enslavement theme, the look of the hub map is different from the DC ver. (a hallway rather than an island), there's a minor stealth segment in one level but it's not that good - even if you get spotted while moving after disguising yourself with the bush it doesn't matter and apparently globox being right next to you doesn't matter either, button mashing bonus levels (meh), somewhat choppy framerate at times regardless of settings (barely noticeable), can't bounce off of enemies (can stand on ones you've attached a plum to but they're rare), no firefly (lantern) or blue elves (shrink) abilities? - Rayman 1, no backtracking with new abilities to reach items in previous levels

-
The last phase of the final boss fight is a bad Star Fox 64 (arena battle) ripoff where you can't make a single mistake or the boss regenerates - there is a hidden infinite ammo power up if you go straight up in the beginning of the fight but finding it is a matter of trial & error
Sanctuary of stone and fire level - too long and you can end up taking a wrong turn (there's no warning) and have to redo a buggy rocket horse segment where you can die even though you're not touching any obstacles+some slow lava segments
Some control/interface issues (twitchy controls and sometimes weird camera during the waterski segments, the game often doesn't let you rotate the camera and often moves it on its own which can be rather disorienting, sometimes using the "lock the camera behind rayman" button makes rayman turn and move a bit instead of doing what you want, no button config - default XB360 control mapping is incomplete and not quite optimal, slower forward movement while hovering, can't start charging your shots while moving unless you're strafing - if you start charging a shot while still then you also can't start moving, can't charge while jumping or climbing)
Sometimes uneven difficulty (spikes: final boss's second phase, auto-scrolling segments, dips: second guardian boss/foutch)
Trial & error (wrong path in the sanctuary of stone and fire level which is also one way, waterski segments - just touching most obstacles kills you immediately, most auto-scrolling rocket horse/shell segments and some rocket keg segments - sometimes twitchy camera here and again simply touching some objects kills, some precise jumps even early on, bonus level race controls aren't explained - have to mash A/B alternatively, some enemies like the piranhas in whale bay/level 9 are invincible)
No HP refill after beating a level and only 50% after dying - have to beat the bonus levels which require 100% completion to enter so it rarely happens in a casual playthrough
Some tedious aspects (backtracking if you missed a lum or cage in a certain segment and sometimes it can't be done (points of no return) so you have to replay the level, no additional entry points unlocked for a beaten level - bad since there are quests that make you replay parts of levels to progress, escort segments - globox moves pretty slowly and keeps running away when you face enemies plus you can't simply call on him, the game starts you next to the first level on the hub map when loading a save instead of at the level you last beat, kinda slow movement when carrying kegs or key spheres and sometimes you have to walk a decent distance - with the spheres you can throw them ahead though so it's not much of an issue, some of the "boat" segments in the sanctuary of stone and fire)
So-so draw distance on a few collectibles (the wind gust segment, )
Various unskippable cutscenes and you can't speed up the dialogue in most of the dialogue-centric ones (some of these also repeat when re-entering previously visited but unbeaten levels) - however there's a cheat that lets you skip these too ("nomovies" while the game is paused lets you press enter to skip future cutscenes)
The 2D textures and sprites used for things like climbable vines and some doodads looks a bit dated and clashes with the 3D
Repeated beeping sfx while at low health, missing some content added in the later DC ver. (no Globox Village, no widescreen support, one less robo pirate type, a cutscene where Rayman frees the prisoners) and PS1 ver. (some new sub areas and a bonus level however this ver. cuts and changes a bunch of other stuff), so-so bonus level rewards (power fist or health refill), the music resets after an intro cutscene to a level plays, lame reward for getting 100% - just a thanks in the credits,