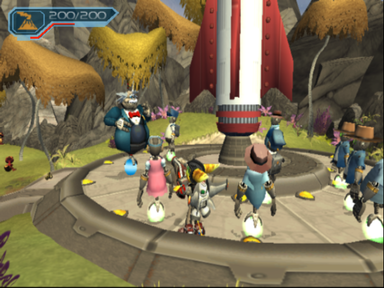 
*Last level and boss (only had two armor upgrades)

​
​+
Platform Adventure-style gameplay (buy movement upgrades/tools that let you progress and backtrack to explore more of previous levels (sometimes you'll go back to a previously visited level to progress), partially open ended levels, upgradeable lifebar and weapons+armor here (the weapon and lifebar upgrade from killing enemies (each one has an individual progress bar) while armor upgrades are bought on at a time at a few points spread across the whole game), besides upgrading weapons once you can mod them twice for camera lock-on and added acid or lightning effects to their shots with the large bolts found in the levels, can also mod the ship after a few levels for additional weapons+upgraded boost+faster lock-on+upgraded shield and default weapons)
Adds regular on-foot strafing
Shops (buy weapons, ammo and tools)
Various new weapons (some cool ones: chopper blades ricochet and are semi-homing, homing missiles, flying robot mascots, placeable miniturrets, spiderbot - controllable bombs+used to go into some vents to hit switches, lava beam (like lava toothpaste) though it's more situational, ). The weapons from R&C1 also carry over to a shop on planet 4 if you have a memory card save from the first game (have to re-buy them though)
Some interesting new gadgets (tractor beam - move certain obstacles and enemies to create new paths or unlock doors, thermatron - melt ice and freeze water, hyperspace warp system - random teleport during space flight combat, levitator/jetpack however it's too limited in use - doesn't recharge unless you stand on a certain pad, hypnomatic - take over certain enemies (ends up similar to the spiderbots though except they can jump)) and old ones like the grapple beam/swingshot return
Various shortcuts leading back from detours (either to the beginning of the level or around the middle/crossroads point; generally teleporters) and some detours loop back to the middle
Item drop magnet (can also throw the wrench like a boomerang at bolts to pick them up; could've been stronger but can be upgraded in the late-game)
Moves list in the help menu
New mini-games and challenges (some mandatory and some optional; some good: battle arena challenges on planet 2 (only the first challenge is mandatory?) and 10/Joba, hoverbike racing on two planets (similar to hoverboard racing in the prequel); some decent: electrolyzer hacking mini-game (rotate a number of switches to allow laser beams to pass), ; some OK - mandatory space flight combat in-between some planets, exploring and drilling for ore in the hover vehicle in the desert; some meh: glider segment near the desert (decent in the facility area), infiltrator hacking mini-game)
Some other interesting level gimmicks (Mario Galaxy-like mini-planet segment on planet 2 (4 years prior) with super jump pads as well as later on during the giant clank mech duel, cylindrical second battle arena, vents for the spiderbots, )
Zoomable map (2D, top down) which marks visited points of interest and what you've explored - not big bolts though?. Can also browse previously visited planets on the map menu
Mission/quest log (slow scrolling text though)
Voiced tutorial messages that don't interrupt gameplay and can be stopped (can also review these messages in the help menu)
Partially destructible environment (generally rewarded with more money)
Some good humour (parody, consumerism and greedy corporatism satire) and some decent (slapstick)
Very good animation (including a lot of background animation like planes flying around in cityscapes) and voice acting
Some good bosses (battle arena robot, angela/the thief on the first ice planet)
Regain the heli-pack and thruster pack+swingshot and grind boots all on planet 3 here (double jump (higher than the somersault) and long jump/air dash+somewhat higher somersault+high jump (same height as the heli-pack's double jump)/swing at certain points/grind on rails)
Mostly skippable cutscenes
Hidden items and rooms (some breakable walls)
Visit Ratchet's apartment at one point
Some decent puzzles (timing-based, water level altering, box stacking with the crane for one big bolt, switch puzzles involving the gadgebots - similar to Landstalker or FF Adventure)
Enemies can accidentally hit each other when attacking
Get a hydro-pack for swimming faster before the first underwater segment here
Don't fall off a ledge if doing a combo right near the edge (can't hold a button to not jump off when moving on small platforms though which would've been more useful)
Context sensitive auto-equipping of some gear (magneboots, hydro pack, grind boots, O2 helmet)
Can knock enemies into pits (and still get the money) and exploding boxes
The villain sometimes appears during level exploration (planet 6 train ride)
Pretty good twist to the story in the mid-game (you're apparently working for the bad guy - no moral nuance to him or who you thought was the villain though as he's just deceptive and the other guy (who's actually a gal) acts like a terrorist and kidnaps clank instead of trying to convince you about Megacorp, the heroes are also too naive about what they see in the video before being betrayed though)
Achievements of sorts (skill points - unlocks an epilogue cutscene?) - learning how to get them is mostly trial & error though
Some scripted events during levels (train ride, sudden reinforcements, megacorps guided tour) - somewhat fewer than in the prequel though
Some memorable characters (Qwark, Angela, Fizzwidget)
A few sequence breaking possibilities (part of intro level by breaking a window, first half of planet boldan (jump off of rails), can climb certain obstacles and walls with high jumps and mashing jump?, more with glitches)

​
Bugs:
-Sometimes lose your grip if a platforming you grabbed the ledge of starts moving (emulation issue?)
-At one point my gravity boots didn't register on planet Boldan so I fell off a skyscraper
-The spiderbots sometimes can't trigger floor switches later on that they could trigger earlier in the game
-Lock-on doesn't quite work on the sea monsters in the tundra area
-Enemy health bars sometimes don't update properly if joined by the flying robot mascots