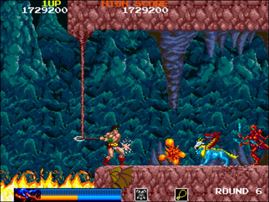 
+ Weapon/speed/armor upgrades (the most useful and interesting is a flaming sword which shoots fireballs), up- and downstab, momentum plays a bit of a purpose in combat (I think), a couple of good bosses (first boss, teleporting sorcerer), words of encouragement after each boss fight, sometimes intense action (many sprites at once), slopes, some alternate paths, each boss has its own hideout (a cave or castle, nice build up for the battle)

+/- Some enemies will disappear if you move away from them until they're off screen, need to hit weapons to pick them up (the game turns this into a fun challenge at times though), hidden time limit on upgrades, you can move backwards in a level but only for a couple of screens, somewhat few checkpoints (except for the boss fights where you respawn in the boss room), respawning enemies, can't move while crouching (except when hit by an enemy (Rastan then takes a step backwards which is kind of weird)), no life refill after beating a stage

- Somewhat primitive/odd jump controls (Rastan stops moving forward pretty quickly which feels unintuitive and takes some getting used to, Rastan also falls straight down when moving off a ledge (which looks silly in some cases where there's a chain you can climb right next to where he falls), uneven difficulty (sometimes enemy patterns/spawning points are different, final boss is a pushover, etc.), repetitive (repeats enemies, gimmicks and backgrounds over and over), mostly poor bosses (the final boss just takes a few slashes to kill and almost no strategy, the one before it feels kind of random and the hydra only requires button mashing), no sense of weight to most of the action (so-so sounds and mostly poor death animations), the screen doesn't quite keep up when moving upwards or to the left (leads to cheap hits), trial & error (instant death from touching the sides of giant spikes, falling boulders, boss patterns, bat attacks from all directions when standing still for just a few seconds in some areas), some annoying instruments (fairly ambitious compositions though with some prog/ambient elements), some poorly defined sprites and sometimes odd colour choices, so-so animation, some tedious platforming sections (the moving rock platforms in the jungle),