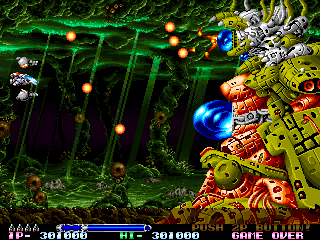 
+ 2-player co-op, charge attacks return and they're homing here (your ship sends out up to two gun drones when firing it off), good variation in level hazards (falling and partially crumbling platforms, moving platforms and "elevators", laser alarm traps, etc.), some cool weapons (green laser - some of the beams home in on enemies on the vertical plane - blue ricochet spread beam), improved audio quality (YM2151+sampler (pretty good) used for music and samples for sfx, house/dance style here), some mini-bosses, some alternate paths through parts of levels, some large and detailed sprites, difficulty options (4 levels - very easy-hard, number of lives, coin worth), good bosses overall (some have multiple phases, the final one is kind of easy after the first phase), pretty good animation, pretty good but short intro cutscene

+/- The drones aren't shooting nor solid while detached from your ship here like the pod in previous games (they could've let you pick between two ships), sub weapon back attack is dependent on you having last moved to the left (shoots in the opposite direction of your last movement, would've been better to have a switch button), no shields besides the drones to the top and bottom? (die in one hit), respawn on the spot (lose all but one weapon upgrade as well as all speed), bosses die pretty quickly when fully upgraded, can quickly call back the gun drones after a charge attack (less of a risk/reward thing to use it than in the prequels though in a few situations you'll unleash counter attacks by using it), somewhat forgiving hit detection,

- No auto-fire, no manual speed adjustment (power ups), no weapon inventory, no drone formation options (can't put them in front of your ship like the pod in previous games), trial & error (later bosses and certain segments of levels 4-6), kind of hard to recover after dying later on (the game does hand out a lot of power ups but the speed loss makes a big difference), few main weapons (3), a bit short (~20 mins (if you don't die) spread across 6 levels), some bosses are a bit generic looking compared to the prequels