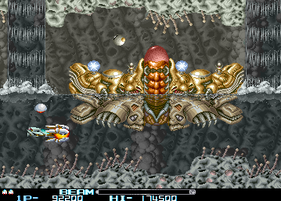 +
Charge beam (full charge goes tears through enemies, super charge covers almost the entire screen with projectiles)
The orb is back with one new weapon type
Great art direction and animation
Large and detailed sprites
Good use of colour and balanced shading
Pretty frequent checkpoints
Great bosses overall (with interesting ways to use the orb against them)
Difficulty options (hard even on Easy)
Rescue some allies during the final boss fight
Nice in-game ending cutscene (in which you and your allies and escape from the enemy ship)
Fun weapons overall, pretty good variation, sometimes interactive environments (waterfalls, breakable walls), intense action

-
Slowdown (screws with your timing)
Hard to recover after death (lose all speed and power, you do get a power up pretty quickly after respawning but it's not enough later on (which means huge difficulty spikes ahoy))
Need power ups to boost speed and it can't be adjusted (full speed is too fast and sensitive in all situations but one)
Heavy trial & error (especially the second to last stage with the changing paths and the final boss which has a short time limit until things get brutal, need to have the right weapon equipped to deal with some segments)
Some annoying sfx/instruments (primitive FM)
Somewhat samey backgrounds after the second stage
The new weapon kind of sucks