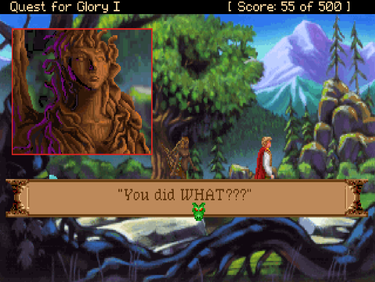 
​
+
Quest Adventure/RPG hybrid (character creation with stat distribution (6 abilities/attributes, 7 skills), three classes (fighter, magic user, thief - can break into houses an steal certain items) and you can create hybrids of all three to an extent, shops, loot enemy corpses)
Option to export your character to the next game
Different ways to solve problems depending on which class you picked
Movement speed options
Day/night cycle (can check time of day at any point)
Non-random enemy encounters (monsters can also follow you until you're a couple of screens away)
Save anywhere (many slots in ScummVM)
Can examine pretty much anything in the game world
Running and sneaking moves
Sleep at will (can choose for how long, can be killed when outside if you try to sleep all night)
Activity based stat building/progression, decent animation and pretty good art direction, pretty expressive sprites, dialogue trees and point & click interface - replaces the text parser of the EGA version, pretty open ended structure and many problems have multiple solutions, good sense of humour overall (witty, sarcastic, silly, references, slapstick), many ways to die, character portraits during dialogue, skip dialogue on a per text box/paragraph basis, tooltips in-game (question mark), can practice all your spells in the forest in this version, some memorable characters and locations (Erasmus and his tower, the dryad, Brauggi, mushroom garden - can end up on a drug trip, Erana's garden), some good puzzles (quiz which changes a bit every time you reload or replay, kobold's cave (with one exception - see below), yorick's labyrinth), mini-game (mage's maze), adds sampled sfx+more music tracks and more background detail here and there, can block+dodge and use two types of attacks in combat (swing and stab) - can also throw rocks and daggers at enemies (rocks can be picked up pretty much anywhere in the wild), slightly different ending depending on which quests you finished (main one is rescuing the baron's daughter)

+/-
Real-time combat (very clunky and heavily stat based but supposedly easier in this version)
Your avatar doesn't speak directly (you just pick subjects to talk about from a dialogue menu although in a few scenes you pick a specific sentence or word to say) - some missed potential for humour
No dialogue portrait for the hero
Hunger and stamina mechanics (need to eat and sleep each day - eating is automatic if you have rations though and not much of an issue at all because of Erana's tree)
Generally can't say goodbye to NPCs, less stylized/cartoony visuals
Can't remove bush walls with the flame spell
Can't actually play cribbage with the hermit
The dazzle spell and the armor aren't needed
You have to grind to be able to face the strongest random monsters

-
Some grinding for stats/spell skills & other skills/money
It doesn't make sense that you can't move at all before baba yaga transforms you when you meet her until you have the magic mirror in your inventory (would've been more interesting if you had to make her let her guard down or if there was an alternate solution) - it's also weird how she can still speak after turning into a frog when you couldn't
The brigand hideout sequence where you have to avoid getting surrounded is way too rigid in its design - you can't use any combative skills you've acquired up until then and the game ends way before they even reach you
Doesn't make sense that you can't even try to dodge "the duo" when they start throwing knives ("you have to give yourself room" at the minotaur also doesn't make sense)
Plenty of trial & error (need to check the stone in Erana's garden three times to note that it can be opened, can't become better at climbing if you didn't put any points into it when creating your char?, moving into the graveyard at night sometimes means you'll get killed without being able to move away or apply the undead unguent - the unguent also doesn't last very long (no indication when it wears off), killing the bear means killing the baron's son - I believe there was a warning in the counter curse rhyme that you can get from a dialogue at some point (it's repeated by the baron after you rescue his son) but it's easy to forget, you still lose MP if you try to use a spell where you can't, you don't gain spell skill by using the fetch spell on the plants?, can't escape the castle bailey at night?, dropped items disappear if you leave the screen, can't attack the stag or the game becomes unbeatable, can't eat or discard the acorn or the fairy dust or the dispel potion (needed in the brigand café, you can get out of the Elsa situation by exploiting a glitch though - throw a rock or dagger in a random direction besides her) or the game becomes unbeatable, can't visit baba yaga for the first time between dusk and midnight in this version unless you have the undead unguent or the game becomes unbeatable, can't steal from the healer as she won't let you in to buy the dispel potion afterwards, the manual is pretty vague about the luck stat, one NPC lies to you (he seems pretty shady though), some enemies can hide behind objects, combat mechanics aren't explained in-game, antwerp jump attack - can actually attack it by using the sword on it but you need good timing (bad that you can't use run to move away and avoid death), fairy dance death, need to drop all gear besides the sword and shield to beat swordy lordy, etc.)
No place to leave your items at (aka a stash or vault; later games have a chest) - annoying since your carry capacity is very limited early on
Some interface/control issues (some pathfinding issues in tight spaces (your avatar tends to start moving in the other direction if you misclick), can't choose to sleep until midnight or night at once (have to rest for an hour a couple of times, then wander around for a while before you can rest again), can't skip the various repeating in-game cutscenes (most of them are short though), sometimes hard to get onto the porch to the sleeping old lady's house, time limit of ~10 seconds on each text box during dialogue, lack of hotkeys for various actions and sub menus (needing to keep track of your stamina can be annoying and it drops very quickly in battle early on - if it drops completely you die), can't drop every item of one type at once, right clicking also skips to the next piece of dialogue/narrative which can lead to you accidentally skipping it, can't pick shopping during a conversation rather than picking the bag in the inventory and using it on the NPC, no quest log/journal, )
Sometimes uneven visuals (sometimes dated looking shading and animation, some portraits such as the healer's and fox's, the larger claymated enemies)
No maps
No fireworks outside the magic store in this version
Pretty easy minotaur guard fight
A bit annoying how you'll trigger the (worse) ending if you return to the castle before dealing with baba yaga - they could've made someone ask if you wanted to end the game or not here (the ending itself is also kind of rushed as you don't get to see the baron reunite with his daughter or what happened to Bruno)
No music at the staff roll (bug?), NPC dialogues rarely update after the first time you meet them and you can’t ask them about items you’ve found, few weapon types

Bugs:
-Mushroom selling bug: In the VGA version, gather a lot of mushrooms from the Fairy Mushroom Ring in the forest and sell them all to the Healer. She will say she doesn't need any more, but will take them and still pay you for them.
-Crashes at the staff roll if you click and choose "Play" (go back to game) twice
-Other bugs are fixed by NewRisingSun's patch