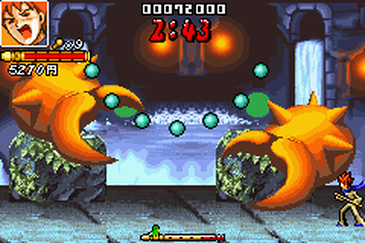 
​
*Most of the 8-bit style levels
**Fighting segment

+/- Very short early levels, some levels are timed while others aren't, auto-enter doors in the side view maze segments (some lead to forced encounters where you have to clear a room of enemies), easy to collect more money than you need, no dodge or block moves, the throwbacks to earlier Konami games are very obvious at times,

- Long and boring maze levels, can't jump and attack normally (only dash/dive forward similar to an attack in Gunstar Heroes - there's no invincibility time so you have to be careful not to jump into enemies you can't kill in 1 hit or 1 hit+1 shield hit), uneven difficulty (most of the sokoban-like levels are very easy, very tough third fight in the Yie Ar Kung Fu-like fighting segment), can't unlock or learn any new combos?, unforgiving hit detection near platform edges in the 8-bit style top down maze segment, can't jump out of a combo finisher animation but can move backwards, some trial & error (blind jump at the high in the sky top down segment, first 8-bit maze segment), no auto-fire in the shoot 'em up segment, stiff controls in the fighting segment,