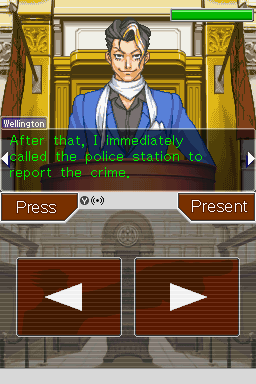 + Some memorable characters (Max, Trilo, Mia, Phoenix, Maya), comical and silly (too much at times), deals with some unusually mature themes considering the cartoony visuals, innovative defense lawyer gameplay (cross examination in court) mixed with detective gameplay in a point and click adventure style, some decent puzzles (the urn in Chapter 2 for example), nice intro cutscenes to each chapter (detective story style), you can keep reviewing a testimony during trial to find contradicting statements which you then prove to be false, decent dialogue overall, Mia in Pearl's body, massive final act with interesting twists, good and bad endings, the part where you need to switch sides in court to protect a kidnapped Maya, Psyche-lock mini-game (basically interrogation of a character using a magic stone - breaks gameflow since you always need to collect and present evidence to proceed instead of making your own conclusions), voice commands (Objection! Hold it! Take That! - these are optional)

+/- Save almost anywhere (makes the energy bar pretty much redundant), pressing command is mostly automated - sometimes Wright makes a good point and sometimes he'll act like an idiot, no ranking system or special challenges, somewhat vague references to the previous game, fast forward button (no 'rewind/review text' button, doesn't speed up animations in-between dialogue), sometimes you're not able to loop the statements in a testimony (to present evidence against them) because the Judge decides he had enough and just buys it - while annoying the info you could've gained isn't crucial to the case, the game is inconsistent about when to let you talk to Ami (a knowledgeable Medium who helps you in court) or not,

- Annoying flashes and screen shaking effects in pretty much every dialogue, only one save slot, linear and 'rigid' to a fault - there's only one specific way to make progress in most scenes (knowing the solution or a logic course of action isn't enough as it needs to contradict a given statement, making up your own statements or going down a specific route at your own leisure isn't possible, the script caters to a young audience and tends to over explain things by having Phoenix act like an idiot (at times he acts like an idiot just for comical effect but it tends to get annoying and make scenes too long (Chapter 2 especially)), default text speed is too slow and manually speeding it up sometimes leads to skipping pieces of dialogue which can't be reviewed without reloading (due to unexpected dramatic pauses in dialogue), numerous spelling errors, lack of an in-game journal (to jot down notes and date/time/locations - sometimes a seemingly minor detail is needed to proceed later on (for example detective Gumshoe's testimony in Chapter 2 where a clue is given in an earlier scene and not found by pressing)), the over the top silliness and disregard for logic can really get on ones nerves (Chapter 2 is very drawn out with nonsensical court drama and having the player get crucial info (a major twist) from a perverted mental patient pretending to be a doctor), having to move between locations over and over to receive pieces of information (needed for Psyche-unlocking, required to find the bullet hole in the box (Chapter 2) or the note in the Ringmaster's coat (Chapter 3)), uneven animation quality (disparity between witnesses body language when zoomed in and when seen with the rest of the court room, sometimes a character keeps an expression when you're moving onto a different subject), plot weirdness (De Killer not realizing he's being betrayed despite the video room with an antennae in his client's apartment, what's with the birds and Acro in Chapter 3?, can't pick up half of Acro's note to Regina in Chapter 3 even though you find it very early on in the Ringmaster's coat, if the box in Chapter 3 was lowered by a rope then how did Acro detach and re-attach it?, Max's cape magically attaching to the bust in Chapter 3, how did Moe not see the rope in Chapter 3 and what happened to it?, the whole idea of having Regina come to the murder scene alone using the note put in her pocket is pretty stupid, Acro burned the cape in his room but there was no smell?, inconsistent autopsy info, Dr. Grey having a gun and not being searched before the channelling in Chapter 2, not being able to examine the channelling room properly before the box was moved, the Judge being a total wuss in most scenes (apparently parodying the higher status of prosecutors in Japan as well as the lower status of defense attorneys), at one point where you need to present a picture of Ini picking her driver's license photo (which is identical) doesn't work), sometimes a dialogue scene outside court will end if you pick a certain subject (forcing you to replay the scene for missed dialogue - however you can't miss anything crucial to the case), you can only move to areas which are adjacent to each other during the investigation parts, oftentimes the 'I don't know/want to talk about it' NPC reply when 'presenting' is quite long (making collecting info tedious - they could've just blocked you from presenting irrelevant evidence to people), in a few occasions characters throw a fit and start talking quickly without you pressing the button (making it hard to follow what they're saying at the end of each text box), some dialogue doesn't quite make sense (poor translation?, fortunately it's nothing too important),