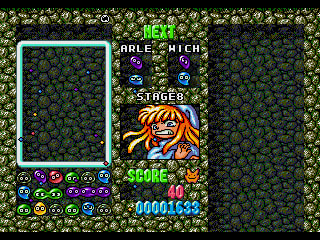 
​
+
Impressive music overall (decent drum samples in Mean Bean Machine)
Attack move ("refugee beans"/rocks appear on the opponent's board when you clear enough beans in a row and combos produce more rocks)
Difficulty options (4 levels)
Good animation and art direction
2-player vs. mode (5 levels of handicap/starting speed setting)
Exercise mode with three difficulty options (affects the falling speed of the beans), decent cutscenes in-between levels (skippable), vertical scaling effect on the title logo, fast+smooth and eventually intense gameplay, decent characters for a puzzle game and each tends to have a different tactic when playing against them,

+/-
Quite a few voice samples but they're also scratchy (can be toggled on/off in the options)
Password save (MBM only)
In each level the beans start falling faster and faster after a period of time and end up falling too fast to keep up with after a few minutes - could've been toggleable for but on level 1 in vs mode it takes a while
Steep difficulty curve
Video tutorial (goes by quite fast but shows some advanced techniques for combos and rock clearing)
Can't do counter attacks (Puzzle Fighter), ​4 chain combos are too strong for vs mode - you'll probably win if you drop one in vs mode (in later game's there's offsetting so that if there are already are a lot of beans on the board getting attacked then the attack is less severe, in scenario mode the super high speed from level 7 onwards makes it hard enough to pull off that it doesn't matter as much)

-
Repetitive
Gets much harder towards the end because of the default speed increase
No puzzle mode (see GG ver.)
Sometimes you won't get a certain color for about 10 times in a row which can make it impossible to recover when half or more of the board is filled and the speed is high


Notes:
-Mean Bean Machine differences: Removes the Beginner course that was present in Puyo Puyo and doesn't let you pick between starting at level 1 or level 4, adds a password feature, all of the music is remixed in MBM and some songs were replaced (some were rearranged and some were covered but left unused)
​