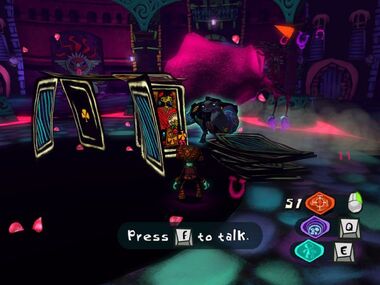 ​
​+
Telepathy/mind reading theme (each level is a representation of a character's personality or psychological state, you can find a char's important memories in their level, you can find and clean up a char's emotional baggage in the form of locked item containers as well as mental cobwebs (blocked off parts of their mind) in the form of spiderwebs, a "mental world" connects all characters' minds, psycho portal item (put on certain NPCs' foreheads to enter their minds), )
Non-intrusive helper sidekick (Cruller's telepathy link, gives puzzle/quest/combat hints) - can also teleport you out of and back into levels which lets you add new abilities almost on the fly
The levitation ball item (lets you move faster/move up slopes/jump farther when stood on, lets you hover jump when used in mid-air)
Action adventure elements (basic level up/rank system, upgradeable spells/psi abilities, fairly large hub world (the training camp for psychonauts) with hidden items and a shop, show inventory items to NPCs to get more info about them or related quests, revisit levels to search for missed items and to remove cobweb which can be traded in for Psi cards (combined with another item lets you increase your level/rank and learn new psi abilities), teleport back to previously visited parts of a level via teleporter NPCs, )
Good voice acting overall
Some memorable characters and locations
Some creative level design (the TBS/Adventure hybrid level in Fred's mind - your opponent is very passive in terms of the TBS part though, making an enemy throw knives at a spinning wheel to use as poles for swinging in the circus tower, how the final level is a mixture of Raz's and Oleander's childhood memories), rail sliding/grinding (Tony Hawk 1?), double jump by default (Dragon Buster), NPCs talk to themselves/think aloud or to each other when walking near them and most are doing some activity (helps immersion) - they also tend to do something different between each level, a few alternate paths through levels, skippable cutscenes, optional side objectives in levels (escort mission, ), very good variation overall, very good art direction, underground fast travel system in the hub world (Zelda 1), enemies can blow each other up, telekinesis (throw objects and enemies, can throw enemies and objects into walls to damage them), 5 save slots per game (shows time and location), actually surprising story twist, comical tone, temporary shield ability (block enemy projectiles, reflect some projectiles, knock back melee enemies when upgraded), clairvoyance mechanic (see the world through an NPCs eyes, used for some puzzles), some good bosses (phantom, most of the sea monster fight, rainbow squirt mom, bull fight and some of the wrestlers), partially non-linear structure (tower area), decent puzzles,
Compared to PS2: Better textures and more stable framerate, shorter loading times, tighter controls?, final level is a bit easier?,

+/-
Can only skip some dialogue on a per sentence/text box basis (plenty of dialogue can't be skipped or sped up)
Can't double jump after moving off a railing or jumping after swinging around a vertical pole
Interactive game select and slot select menus
Save anywhere (loads you at the previous checkpoint though)
Pretty long levels overall
Level/rank requirements on some gear - not a big problem though, you can buy an item that makes items get pulled towards you but it doesn't work on figments and cards, parts of the sea monster boss might've been more fun if you had to use your telekinesis ability against it, the way the game portrays you as being a giant in lungfishopolis might've been more effective if your model was bigger instead of everything else smaller, some creepy and mature/"mature" themes (the camp is about training 10 year olds to be psychic soldiers or agents, Raz kisses the kid NPCs' brains when you collect them for some reason, NPCs getting their brains sucked out and used to control machines, some overtly sexual jokes, the emotional baggage and memory aspects, kill civilian fish people without penalty in lungfishopolis), while the radio messages in lungfishopolis are funny it's a bit annoying how they pause the gameplay, pointless extra lives system since you'll get sent back to the last checkpoint after going back into the mind level you were on, so-so reward for removing all emotional baggage from a mind/level (just a reel of basically concept art rather than some interesting piece of the relevant character's background), no rhythm aspect to the dance party level, pretty expensive items (while the sensor really helps you can't get it and the cobweb duster before the first level so you'll have to replay that one if you want to get all webs), enemies can aim at you from farther away than you can aim at them,

-
Frustrating vertical platforming in the end game (end of the asylum tower and the circus tower segments - have to replay long segments if you make a mistake and in the latter you have to listen to kid oleander screaming over and over then wrestle with the camera during some tricky platforming before the final boss)
Some trial & error (the game is too picky about how to stand when interacting with the code lock in the milkman level so you'll easily miss that it's interactive without an item, you'll still get shot(=lose a life) even if invisible during the assassin segment of the milkman level, can't get a tip on how to beat the mini-boss in the milkman level by contacting crull - he contacts you after fighting it for a while instead)
Too much focus on item collecting (the sensor speeds up money grinding quite a bit though)
Some control/interface issues (can't map an ability to L2, sometimes the camera ends up behind a wall when near one and facing away from it - mainly a problem in parts of the asylum tower, some non-solid platforms in the thorney tower area, slow shimmying (don't have to do much of it though), slow shop item descriptions, no mini-map and no in-level maps (confusing milkman conspiracy level)
Can't zoom out the map
Can't buy more than one of something at a time?, overly small hit boxes on the figments and the moving ones can move into walls making it take longer to get them, sometimes have to use the mouse or keyboard to navigate a menu, can't reverse the viewing controls on the x axle, occasionally inconsistent grabbing of ledges when moving off of a platform and grabbing certain ledges (parts of the Bonaparte level), can't do a normal attack in mid-air, some invisible walls (you're also arbitrarily locked out of part of the beach area by two NPCs who you can't beat up/push out of the way+invisible walls there), can't skip on a per sentence basis during custscene dialogue, can't add your notes about things to check later on (safe in the cave for example), sometimes annoying camera during the chase segment with the sea monster), some annoying characters (the cheerleaders, boy oleander), can't use the pyro ability to burn the planks blocking the door to a cabin in one of the sub areas of the hub world - can use it to burn tree roots at the graveyard, the music doesn't change when encountering enemies in the hub world, health power ups bounce around in a circle and can fall off platforms (sometimes makes them harder to get), some tedious platforming where you'll have to redo a segment if you fall down, a few objects with inconsistent hit detection (pink trees on the beach, some ropes and roofs in the bonaparte level, parts of the Bonaparte level), sometimes when moving between sub areas in the hub world where there isn't a marked entrance you'll get teleported back to the regular entrance to the area your move to or the previous one, you moving slower and not being able to use the ball in lungfishopolis doesn't make sense and leads to some boring dead space segments, the way you collect the brains in the tower is a bit anticlimactic (they're just sort of there), overly convoluted level design in the bonaparte level, Sheegor can see you even if you're invisible for some reason, no reward for getting everything