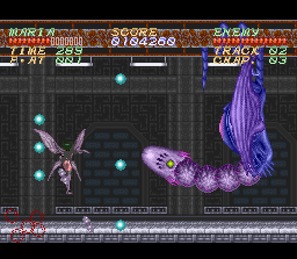 +/- Revert to first level of upgrades after taking a certain amount of hits while at your current level, can't move backwards in a stage, sexualized/barely dressed female character, unlimited continues, checkpoints at bosses (means you'll have to fight without upgrades and bombs), need to stand still on the ground for a smart bomb/magic to work

- Need a certain power up to hit anything below your waist as Ryo, sometimes loose scrolling (can't keep up with you if you're running or jumping), walking speed is so slow that you want to be running at all times (having to keep pressing R), some trial & error, safe spot on first boss (if you're fully upgraded), second boss is just a battle of attrition, somewhat bland first levels (flat, gray corridors), unbalanced upgrade system (Maria's final upgrade is massively overpowered while the previous levels are pretty much the same), some odd sound effects, smart bombs required to not get hit in many situations, stiff jumping mechanics (vertical focused (Contra) and triangular curved, can adjust jump height in detail though), repetitive music, sometimes distracting backgrounds, some slowdown and flicker, tedious third stage (destroy the spawning points mission, very short stage as well), lame autoscrolling stage (highway), short (6 stages)


Comment:
Unlike Valis, this game doesn't have great cutscenes and music to make up for mediocre level design and battle mechanics. There are two different characters, male and female, but they play almost exactly the same, and Riot didn't bother to balance the weapon upgrade system meaning that if you can stay fully upgraded there's very little challenge to be found beyond some trial & error moments. Taking enough damage from these can revert you back to the lowest weapon level, and this creates some difficulty spikes as you can imagine. Finally there's some slowdown and even flicker here and there. Overall, it's an unremarkable game with an appealing horror themed anime aesthetic that could've been better with a little more effort put into it.