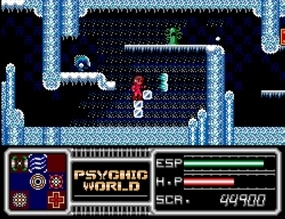 +/- More straightforward stage design compared to the MSX game, unlimited continues (no lives – when dying you lose all upgrades picked up in the current level as well as all your points), small knockback from hits, it’s possible to get stuck and be forced to kill yourself off (stage 4), some one way doors (alternate paths through stages – stage 3, some ladders are also one way even where there’s no alternate path - annoying), health/esp is refilled every 10k points, special weapons look/move very similarly (three forward moving beams, ultra-sonic beam is also pretty much the same as the fire beam in function as it just removes different kinds of blocks)

- No invincibility time when taking a hit (creates difficulty spikes), poor run mechanics (need to walk for a certain distance to start running – forced to run back and forth in tight spaces in some segment), can’t turn around without taking a step (makes some platforming tedious), power ups can drop in unreachable places (second stage) due to not being able to crouch, weapon upgrades don’t work unless you’ve selected your default weapon before picking them up, poor bosses overall (simple patterns, weak, safe spots), clunky way of switching weapons/powers (need to press down+jump then hold jump while selecting – in real time), Shield is overpowered (makes you invulnerable for a few seconds as well as restoring some health each use), teleport is overpowered (All power ups regenerate when teleporting back to the beginning of a stage making it easy to make some weapons/powers overpowered using teleport (smart bomb) – this also makes some later power ups placed throughout the game redundant), teleporting wouldn’t have been necessary in many cases with better thought out level design, some trial & error (level design puzzles, laser trap in stage 4 (knockback doesn’t work as excepted so you need to quickly teleport out if you fall into one), boss/enemy patterns), can’t jump off of ladders, some puzzles are more tedious when you have upgraded special weapons (because of the wider beam you have less precision)